Eight U.S. Democratic presidential hopefuls debated the Iraq war in their second public debate Sunday evening in Manchester, N.H., though each of them favors ending the war. 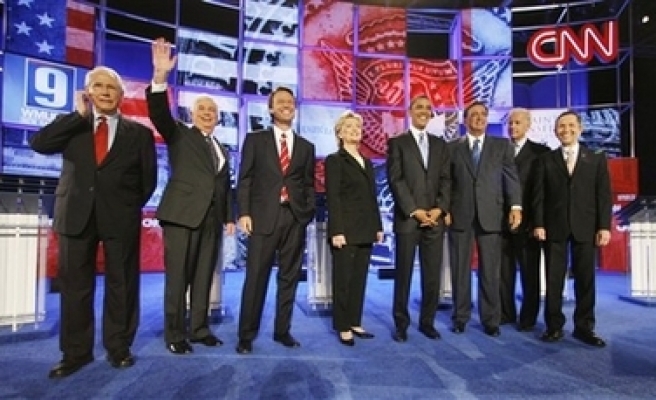 Eight U.S. Democratic presidential hopefuls debated the Iraq war in their second public debate Sunday evening in Manchester, N.H., though each of them favors ending the war.

Edwards said his opponents "have been quiet" on calling for a plan to withdraw U.S. troops from Iraq.

When CNN's Wolf Blitzer, the debate moderator, asked him to name names, the former senator responded: "Sen. Clinton and Sen. Obama did not say anything about how they were going to vote until they appeared on the floor of the Senate and voted."

Obama pointed out that he was against the war from its beginning.

Clinton said she now believes Democrats must stop the war because President George W. Bush, a Republican, will not end it on his own.

In one exchange, she objected to Edwards' contention that the war on terror is just a "bumper sticker slogan."

Clinton: "Now safer than we were"

"I have seen firsthand the terrible damage that can be inflicted on our country by a small band of terrorists who are intent upon foisting their way of life and using suicide bombers and suicidal people to carry out their agenda, and I believe we are safer than we were," said Clinton.

Dodd called his recent vote against the war spending bill "the right thing to do."

He said the United States should try to bring the Iraq war "to a close" and the country should "pursue and push this issue of having a date-certain tied to funding." He also stated it was time to "move beyond this."

The candidates took questions from a team of journalists for the first hour.

In the second hour, questions came from New Hampshire voters.

Besides Iraq, the candidates were asked about various issues, including immigration reform, gays in the military, veterans' health care, gas prices and the Patriot Act during the two-hour debate on the campus of St. Anselm College in Manchester, N.H..

The debate was sponsored by CNN, WMUR-TV and the New Hampshire Union Leader.

The state of New Hampshire is the site of much early presidential campaign activity because it traditionally holds the first primary election.

Ten Republican Party presidential candidates will take part in a similar debate on June 5th at the same location.