US, EU seek 4-month delay to get Russia's approval

The United States and European nations hope to circulate a U.N. Security Council resolution on Wednesday that seeks a four-month delay on a independence plan for Kosovo in an effort to get Russia's approval. 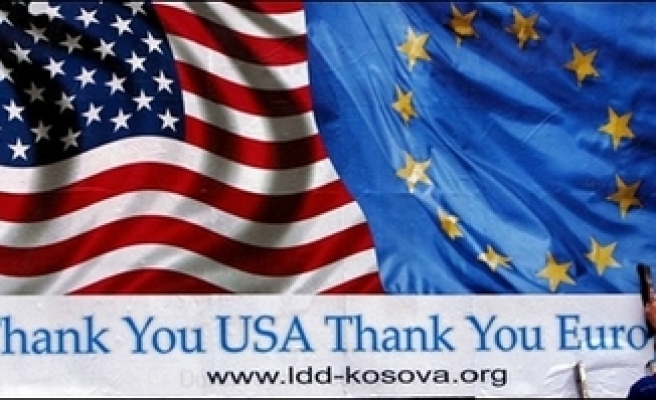 The United States and European nations hope to circulate a U.N. Security Council resolution on Wednesday that seeks a four-month delay on a independence plan for Kosovo in an effort to get Russia's approval.

The document was sent to governments for last-minute revisions before distribution to the 15-nation council. It would give Kosovars and Serbian leaders another chance to reach an agreement, U.S. and European envoys said.

After 120 days, if the talks fail, the resolution would automatically put into effect the independence plan drawn up by U.N. envoy Martti Ahtisaari. The Serbian province has been under U.N. administration for almost eight years.

Russia opposes Kosovo independence on its ally Serbia's behalf and is unlikely to support the resolution, which puts no pressure on Kosovars to accept any Serbian proposals and would put forward the Ahtisaari plan even if Belgrade disagreed.

A deal will probably depend on talks between President George W. Bush and Russian President Vladimir Putin at their meeting in Kennebunkport, Maine, on July 2, some envoys said.

A senior U.S. official in Washington told Reuters that Russia's reaction still had to be tested, including its previous hints at exercising its veto power in the council.

Ahtisaari told Finnish YLE television in Helsinki on Monday he believed Russia would veto his plan but that the province would gain independence this year. This could mean a solution on Kosovo would take place outside the United Nations with the support of the United States and the European Union, he said.

Kosovo, seen by Serbia as a cradle of its culture, passed out of Belgrade's control in 1999 when NATO bombing drove out Serb forces who had killed 10,000 ethnic Albanian civilians in a two-year war with guerrillas.

Western nations say it is time to end the lengthy stalemate on the breakaway province because talks between Serbs and Kosovo's ethnic Albanian majority on its status have led nowhere. Russia, as well as France, have said more time is needed for negotiations.

Under Ahtisaari's plan, a European envoy mandated by the United Nations and the EU would replace the U.N. mission, with power to veto laws and dismiss local officials. The EU would deploy a police mission alongside the current 16,500-strong NATO peace force.

Kosovo would have the right to enter into international agreements and seek membership of international organizations, which could include the United Nations.

In Pristina last week, Frank Wisner, the U.S. envoy for Kosovo, said the West was considering a resolution that would include a further "time-limited" period of dialogue, but with independence the only outcome.