US evangelist gives $6 million to Israel

US evangelist John Hagee announced donations of $6 million to Israeli causes on Sunday and said that Israel must remain "in occupation of all of Jerusalem." 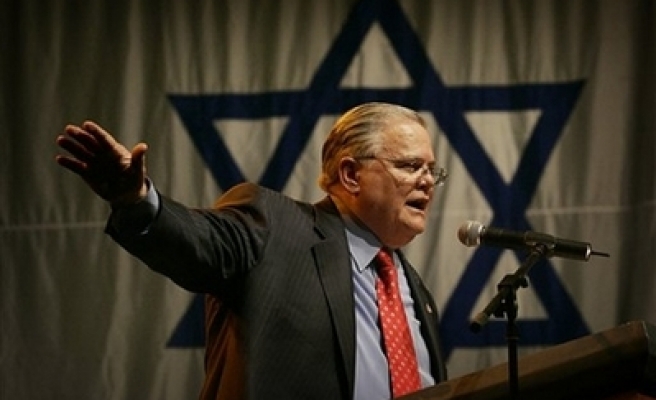 Hagee, a Christian Zionist who has been in the spotlight lately for endorsing presidential candidate John McCain and criticizing the Catholic Church, brought hundreds of backers on a solidarity trip to Israel.

Hagee and his group, Christians United for Israel, joined Benjamin Netanyahu, the leader of Israel's hard-line opposition Likud Party, at a rally in support of Jerusalem remaining "united and under Jewish occupation".

"Turning part or all of Jerusalem over to the Palestinians would be tantamount to turning it over to the Taliban," Hagee told an audience filled with Americans who waved Israeli flags and cheered.

Palestinians say the eastern part of the city, occupied by Israel in the 1967 Mideast war, as the capital of their future state.

Hagee said his group was giving $6 million to 16 Israeli causes. Recipients include the Magen David Adom rescue service and a conference center in the West Bank Jewish settlement of Ariel.

The issue of Jewish settlements like Ariel is at the heart of the Palestinian-Israeli conflict. The support of evangelicals for Israel's continued occupation of the West Bank endears them to Israeli hard-liners but troubles more dovish activists.

McCain, the presumptive Republican nominee for president, distanced himself last month from Hagee following an uproar over the San Antonio megachurch leader's comments on Catholicism.

Hagee has called the Roman Catholic Church "the great whore" and a "false cult system." He has also suggested that the Catholic church helped shape Adolf Hitler's anti-Semitism.