The United States expects North Korea to shut down the reactor at the heart of its atomic arms development within about three weeks, top U.S. nuclear envoy Christopher Hill said on Saturday. 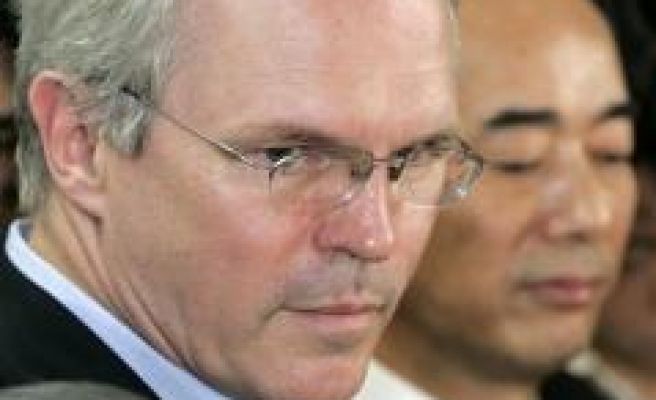 Progress on disabling Pyongyang's nuclear program may be expedited by the transfer to a North Korean account of $25 million in cash that had been frozen in Macau at Washington's behest. Russian news agencies quoted Finance Ministry officials as saying on Saturday the transaction had been completed.

Hill, who made a brief trip to the isolated East Asian state this week, also said the next round of six-party talks on scrapping Pyongyang's nuclear program would take place after the shutdown began, most likely in the early part of July.

Shutdown of the Yongbyon reactor would take place after North Korea had reached agreement with the U.N.'s nuclear watchdog, the International Atomic Energy Agency (IAEA), on monitoring the operation, Hill told reporters in Tokyo.

"Well, we expect Yongbyon to be shut down after there is an agreement between the DPRK and the IAEA on how to monitor this shutdown," Hill said after talks with his Japanese counterpart, Kenichiro Sasae.

"We do expect this to take place soon, and within probably three weeks, I don't want to be pinned down on precisely the day."

North Korea said on Saturday it would begin implementing the nuclear disarmament deal it agreed with top regional powers on February 13 as soon as it recovered funds long frozen in Macau.

Pyongyang committed itself to closing down Yongbyon, the source of its weapons-grade plutonium, in the February deal with the United States, China, South Korea, Japan and Russia, in exchange for energy aid. Progress was stalled by a row over the release of some $25 million of Pyongyang's funds blocked in Macau.

Interfax news agency reported a Finance Ministry official as saying on Saturday that the full amount had been transferred into a North Korean account at Khabarovsk-based Dalkombank in Russia.

An IAEA delegation is due in North Korea on Tuesday to help draw up plans for the reactor shutdown.

Hill said that in North Korea he had raised the issue of Japanese citizens kidnapped decades ago by Pyongyang, a highly emotive issue that prompted Tokyo refuse to provide aid under the February 13 accord until it saw progress.

The U.S. diplomat said he had received no new answers on the fate of the abductees, seized to help train North Korean spies, but added: "I think any time you can meet DPRK officials and raise the abduction issue, it's good."

Easing Tokyo's stance on Pyongyang could be tough for Prime Minister Shinzo Abe ahead of an election expected in July.

A North Korean Foreign Ministry spokesman quoted by state media said that, during Hill's visit, both sides had agreed to consider resuming the six-party talks in the first half of July.

Hill said he did not know if the next round of six-way talks would take place after the Yongbyon shutdown was under way or only once it was fully completed.

"I think we would expect it to happen soon after the shutdown begins," he said, but cautioned that closing the nuclear facility was just the start of the process.

"Shutting down the reactor does not solve all our problems," he said. "There is a lot of work to do, I think."