US Hispanics turning back to Democrats for 2008

Like no Republican before him, George W. Bush drew Hispanics to the GOP. 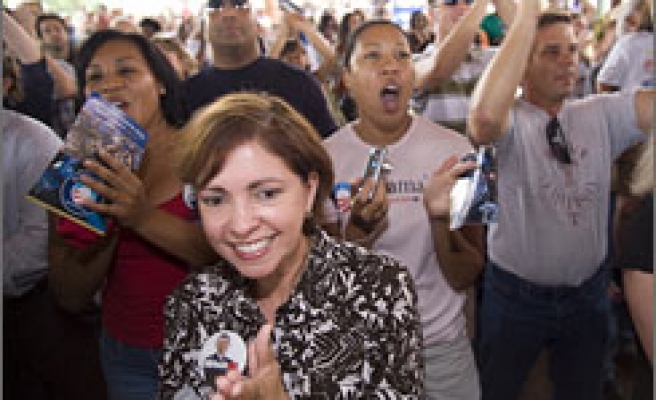 In the 2004 election, at least 40% of the voters in the nation's largest and fastest-growing minority group backed Bush, double the share of Hispanics who had supported Republican Bob Dole eight years earlier. But the inroads Bush made are vanishing.

The chief beneficiary for 2008 so far is Democrat Hillary Rodham Clinton.

A new USA TODAY/Gallup Poll indicates that Hispanics, by nearly 3 to 1, say they're Democrats or lean that way. Of those, 59% support the New York senator over her presidential rivals — her strongest showing among any major demographic group and a huge potential asset for early contests in Nevada, Florida, California and other states with large Hispanic populations.

One big factor behind the flight from the GOP: a heated debate over immigration in which congressional Republicans' remarks on illegal immigrants have offended many Hispanic voters. The fallout from that battle, shifting Latino loyalties and a changing political calendar have scrambled political calculations made about Hispanics after the last presidential election — and raised the stakes for their role in choosing the Democratic nominee for the next one.

"At one time, I think Hispanics were viewed by the people who were running campaigns as a little bit of a distraction, a little bit of a nuisance," says Jose Villarreal, a San Antonio lawyer and Clinton supporter who was a top adviser to Democrats Al Gore in 2000 and John Kerry in 2004. "Now the community is like an IPO. Everybody wants to invest in it."

Even though the presidential candidates are frantically raising money in the final days before the end of the month — the second-quarter fundraising totals are seen as benchmarks for their standing — all the Democratic contenders accepted invitations to addressNALEO, the National Association of Latino Elected and Appointed Officials. They will speak to the group's convention in Orlando on Saturday.

In a sign of how GOP priorities have changed since President Bush's careful cultivation of Hispanic voters, all the Republican candidates declined invitations to join a similar forum there Friday, citing scheduling conflicts.

"On the one hand, they say that they're not willing to concede the Hispanic vote," says Arturo Vargas, executive director of NALEO, whose convention opens today. "On the other hand, it's actions that speak louder than words."

During his races for Texas governor and president, Bush made a point of campaigning among Hispanics, praising their values and sometimes speaking Spanish. He's pushing an immigration overhaul now before the Senate that would provide a path to legal status for illegal immigrants now in the USA.

By 2005, nearly one-third of Hispanics called themselves Republicans or leaned that way.

"It was the family values thing" that persuaded some of her Hispanic friends and co-workers to vote Republican in 2004, says Millie Linares, 47. The middle school librarian was waiting in San Antonio's muggy heat Sunday for a rally featuring Democratic presidential contender Barack Obama.

Hispanics will be more wary in 2008, predicts her sister, Gilda Lopez, 56, a speech pathologist and reliable Democrat. With a crisis in Iraq and questions at home about the GOP's attitudes toward Hispanics, she says, "I cannot understand how a Hispanic person could vote Republican."

The new survey finds fewer who say they will. Only 11% of Hispanics now identify themselves as Republicans, down from 19% in 2005, while the proportion who call themselves Democrats has jumped to 42% from 33%.

Including independents who "lean" to one party or the other, Democrats lead Republicans among Hispanics 58% to 20%.

In a matchup between the candidates who lead in national polls, Hispanics overwhelmingly support Clinton over Republican Rudy Giuliani, 66% to 27%.

Florida Sen. Mel Martinez, general chairman of the Republican National Committee, says there is time for the eventual GOP nominee to recover among Hispanic voters next year — and that doing so is becoming increasingly critical. Hispanics represented 1 in 8 U.S. residents in 2000 but are projected to be 1 in 4 by 2050.

Martinez, a Cuban émigré, says Republicans can't win the White House with today's level of Hispanic support. "It would be in my view virtually impossible," he says.

Patti Solis Doyle, campaign manager for Clinton and the daughter of Mexican immigrants, says the New York senator is determined to reverse the gains Bush made.

"We did see President Bush make some real inroads among Hispanics, and she is very aggressively going after those votes," says Solis Doyle, Clinton's former scheduler and the first Latina to head a major presidential campaign. Her office is decorated with photographs of her husband and two children, a Diego Rivera print and framed copies of three Time magazine covers featuring Clinton.

The campaign has hired a leading Hispanic pollster, a director of Hispanic outreach and a liaison to Spanish-language media. Clinton also has landed some prized endorsements from top Hispanic officeholders, including Los Angeles Mayor Antonio Villaraigosa and New Jersey Sen. Robert Menendez.

In part, Clinton's strength among Hispanics reflects the fact that she is the best-known candidate. Many Hispanics also have lingering affection for her husband, who got 62% of the Latino vote in the 1992 presidential election and 72% when he was re-elected in 1996.

"I like Hillary," Margaret Crutchfield, a 61-year-old Mexican-American, says after the San Antonio rally for Obama, whom she says she also likes. Then Crutchfield adds, brightening: "I love Bill Clinton."

But Richardson still has to introduce himself. Six in 10 Hispanics polled say they've never heard of the former congressman and Cabinet member, the first Hispanic to seek the Democratic presidential nomination.

Richardson is trying to remedy that. He announced his presidential bid in Spanish as well as English. He has accepted an invitation by the Spanish-language TV network Univision to participate in a candidates' debate in September, though he threatens to withdraw unless he's allowed to speak in Spanish rather than through an interpreter. He has announced key Latino supporters even in New Hampshire, a state that's less than 2% Hispanic.

Obama, meanwhile, is playing catch-up. Nearly half of Hispanics nationwide say they've never heard of the Illinois senator. Among Hispanic Democrats and Democratic-leaning independents, 13% support him. That's his weakest standing among any major demographic group, according to an analysis of combined USA TODAY/Gallup Polls taken this year.

A local Latino rhythm-and-dance troupe performed at his midday rally here — brown plastic cacti and colorful piñatas decorated both sides of the stage — before Obama was introduced to the crowd by Juan Garcia, a Texas state representative and Harvard Law School classmate, and San Antonio Spurs forward Bruce Bowen.

In his speech, Obama noted that his work as a young community organizer in Chicago included Latino as well as black and white neighborhoods. He listed Cesar Chavez, the Chicano farm workers' organizer, among his civil rights heroes and pledged as president to build better relations with Latin America.

"We're not going to fan the flames on immigration," he shouted as the crowd cheered. Local campaign volunteers were sporting bright blue T-shirts declaring "AlamObama," a word play on the Alamo landmark a mile away.

Some Republicans reach out

A month after the 2004 election, members of the Congressional Hispanic Caucus were so concerned about erosion among once-solidly Democratic Hispanics to Bush that they sent a letter to the Democratic National Committee warning that Republicans were "clearly winning the battle for Hispanic voters."

Now, the same angst over the Iraq war and the economy that has cost Bush support among independent voters generally also has dismayed Latinos. Bush's job-approval rating among Hispanics is 29%, lower than his 32% rating overall.

Some Hispanics have been alarmed and offended by the harsh rhetoric of some congressional Republicans in the immigration debate and the opposition by most of the GOP presidential field to designing a path to legal status for illegal immigrants now in the USA.

"People think just because I'm Hispanic, I'll open the gates and let them all come over," says Martha Gutierrez, 52, a middle school history teacher from Corpus Christi. That's not true, she says, but "a lot of us look at this as a more practical matter." The idea of forcing an estimated 12 million illegal immigrants to leave is "crazy," she says.

"This country is based on immigrants, and now they want to send them all back?" says Mario Morales, 29, an engineer in San Antonio. "It'll hurt the economy, and it is a little racist."

Some GOP candidates are trying to reach out to Hispanic voters.

Arizona Sen. John McCain, an architect of the Senate's immigration bill, in the last GOP debate emotionally extolled the bravery and sacrifices of Hispanic veterans in the Vietnam and Iraq wars.

With the exception of McCain, however, the major Republican presidential contenders have been more concerned about appealing to tough-on-immigration conservatives who are likely to be important in the GOP primaries than to Hispanics who are swing voters.

Still, in the end, many Hispanics are more likely to be swayed by a personal connection with a candidate than by ideology, Martinez says. That could create an opening for a Republican nominee.

"Once a candidate is identified, if that candidate is a person who can effectively represent himself to that community, we could be back in the game," he says.

Even if Democrats win back Hispanic voters in 2008, Latinos aren't likely to become the sort of reliable Democratic partisans that, say, African-Americans are.

Hispanics are twice as likely as non-Hispanics to describe themselves as independents who don't "lean" to either party.

And while the GOP share of Hispanic votes overall fell sharply in the 2006 elections, some Republican candidates did well. Gov. Arnold Schwarzenegger carried 39% of Hispanic votes in his re-election race in California, for instance. Sen. Kay Bailey Hutchison won 44% for hers in Texas.

That's a signal to both parties, says Roberto Suro, director of the non-partisan Pew Hispanic Center.

"You can see the difference with a constituency that doesn't budge and one that's got play in it, depending on the candidate in the race," Suro says.

Vargas agrees. "It's a mistake to say that if Latinos are swinging back to the Democratic Party, they're there to stay," he says.

Frank Guerra, a San Antonio media consultant who worked on Hispanic-oriented advertising in Bush's campaigns, is preparing a report to the opening session of the NALEO convention that analyzes Hispanics as voters in the same ways that corporations analyze them as consumers.

Hispanics "are moving away from traditional brand loyalty" as more companies — and candidates — target them for their business and their votes, Guerra says.