A deal on granting legal status to 12 million illegal immigrants collapsed amid partisan rancor in the US Senate, dealing a sharp blow to President George W. Bush. 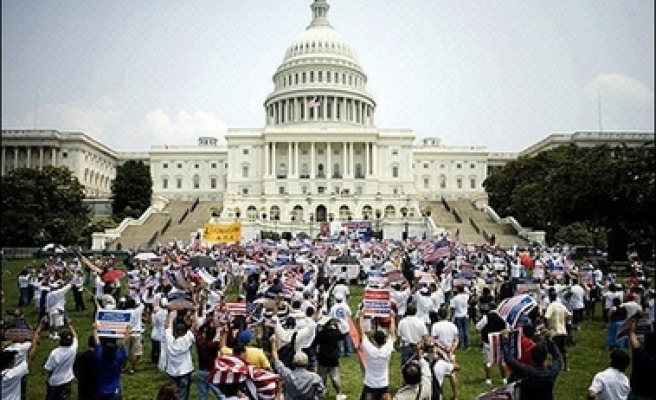 A deal on granting legal status to 12 million illegal immigrants collapsed amid partisan rancor in the US Senate on Thursday, dealing a sharp blow to President George W. Bush.

The Senate’s Democratic leader Harry Reid withdrew the landmark and controversial measure after members voted for the second time in the day not to move it towards a final vote.

After tense hours of brinkmanship between Republicans and Democrats, only 45 members of the 100-seat Senate voted to limit further debate on the measure, 15 short of the total needed for it to proceed. Fifty senators voted against.

Reid forced the vote, saying that the Senate needed to pass the bill and move on to debating energy reform and the war in Iraq, after two weeks of work on the immigration bill.

Republicans complained his manoeuvre would not allow them enough time to offer amendments to the legislation, a key second term priority for Bush.

Democrats however accused some Republicans of offering repeated ”killer amendments” in an effort to make the bill collapse.

Despite the setback, Reid pledged to carry on working to pass an immigration reform bill, but added: “we are finished with this for the time being.”

“We are very close, at some point we are going to do this.”

Prospects for a future immigration deal making it through the Senate however appeared uncertain, given antipathy to the measure from conservatives, pressure of other business, and partisan fighting between Republicans and Democrats.

The looming 2008 congressional and presidential elections also mean that unless the measure is brought up soon, it will get caught up in a political maelstrom.

Eleven Democrats, mostly from conservative western or southern states voted against moving forward with the legislation. Seven Republicans voted with the Democratic leadership.

As Senators trade blame for the failure of the vote, Reid warned Bush should pressure Republicans to vote for the bill, saying the president’s second White House term was quickly running out.

“He has a relatively short time to help us with this piece of legislation,” Reid said.

“Let’s have President Bush work with us on this. I want to work with him. I don’t say that very often.

Republican leader Mitch McConnell meanwhile complained: “I think we are giving up on this bill too soon.”

The immigration “grand bargain” was reached last month by a fragile bipartisan coalition of senators and the White House, and is aimed at bringing undocumented workers out of the shadows, establishing a merit-based points system for future immigrants and a low-wage temporary worker program.

It includes a border security crackdown, punishments for employers who hire illegal immigrants and an attempt to wipe out a backlog of visa applications from those who have gone through legal immigration channels.

Senator John Kyl, a conservative Republican who was one of the architects of the bill, said “failure is not an option. We have a great problem here that needs solving.”

Another backer of the bill, California Democrat Dianne Feinstein, expressed regret at the outcome, and hit out at bill opponents who said it was tantamount to amnesty for illegal immigrants.

“For me this has been a very sad day, I had hoped the outcome would have been very different,” she said.