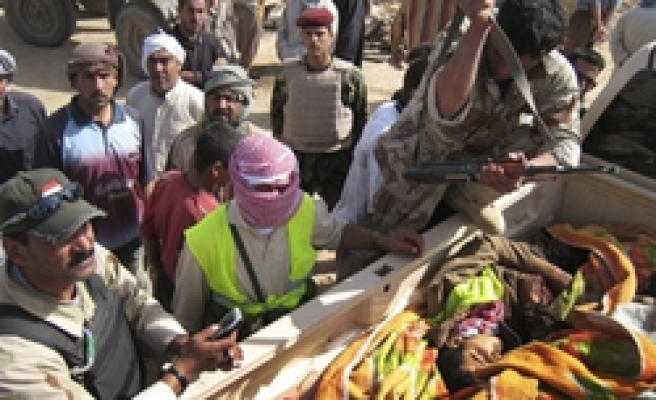 The U.S. military denied the checkpoint it attacked in the Tigris River city of Samarra was manned by friendly members of the so-called awakening councils and said those killed were behaving suspiciously in an area recently struck by a roadside bomb.

A police officer said six members of the awakening councils were killed and two were wounded when the airstrike in Samarra hit two checkpoints about 100 yards apart. The officer spoke on condition of anonymity because he was not authorized to release the information.

AP Television News footage of the aftermath showed awakening council members loading bodies into a pickup. Their faces were masked and they wore bright yellow vests — apparently to identify themselves for U.S. forces as members of friendly groups. Bloodstained rocks and bits of flesh could be seen around the checkpoint.

U.S.-funded awakening councils, which first sprung up in Anbar province west of Baghdad and spread to Baghdad and surrounding areas, are composed of mostly Sunni fighters who turned against al-Qaida in Iraq and joined forces with the Americans.

The U.S. command credits those groups along with a cease-fire by anti-American Shiite cleric Muqtada al-Sadr's Mahdi Army militia and the addition of an extra 30,000 American troops with a drastic drop in violence nationwide.

The airstrikes in Samarra, 60 miles north of Baghdad, came some two hours after U.S. soldiers stopped at the two checkpoints to meet with the Sunni fighters, according to a local awakening council leader.

"They asked us general questions like: 'Have you gotten your IDs?' and 'Do you need anything?' and then they left," Sabbar al-Bazi told The Associated Press. "Two hours later, after I had gone home, I heard two explosions, probably caused by two missiles, and machine-gun fire from a helicopter."

"He asked if I had known about this checkpoint. I told him I knew about it two days ago," Ahmed said.

The U.S. military said six Iraqis were killed and two wounded when an AH-64 Apache fired at them after five individuals were "spotted conducting suspicious terrorist activity in an area historically known for improvised explosive device emplacement."

It denied the site was an awakening council checkpoint and said the incident was under investigation.

"Insurgents will continue to use radical methods as they become more desperate. However, we will keep the pressure on the enemy until there is no longer a threat," said Capt. Stephen Bomar, a U.S. military spokesman in northern Iraq.

In other violence Saturday, a bomb exploded on a minibus in a predominantly Shiite area of eastern Baghdad, killing at least one passenger and injuring eight, including a woman, police said.

A roadside bomb targeting a police patrol also killed one passer-by and injured seven, including five officers, in the northern city of Kirkuk, police said.

An awakening council member in western Baghdad's Mansour neighborhood also was killed and four others were injured in a mortar blast, police and hospital officials said.