US links 'Syria to killing of Lebanese MP'

US President George W. Bush on Wednesday indirectly accused Syria of involvement in the Beirut blast that killed a Lebanese anti-Syrian MP and nine others. 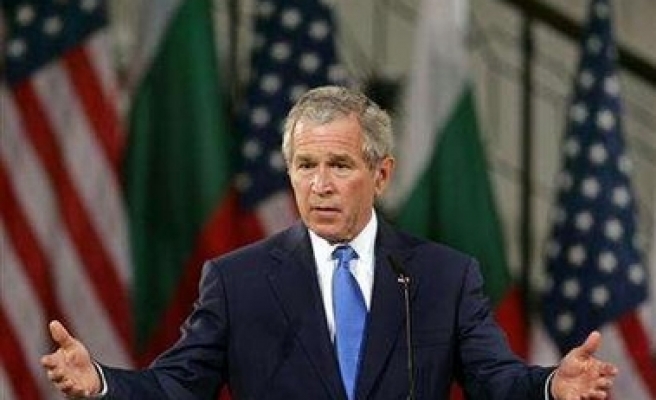 US President George W. Bush on Wednesday indirectly accused Syria of involvement in the Beirut blast that killed a Lebanese anti-Syrian MP and nine others.

US officials said the attack was aimed at undermining democracy in Lebanon.

Lebanese MP Walid Eido, 65, his eldest son Khaled and eight others were killed on Wednesday in a bomb blast near his Beirut beach club that the ruling majority in parliament blamed on Damascus.

He added: “The United States will continue to stand up for Lebanon, its people, and its legitimate government as they face these attacks.”

Eido, the Sunni chairman of parliament’s defence committee, was a member of the Future Movement of MP Saad Hariri, whose father, former premier Rafiq Hariri, was assassinated in a similar seafront blast more than two years ago.

Eido is the third member of the parliamentary majority to be killed in a car bombing in the past two years.

In a statement, Secretary of State Condoleezza Rice condemned the bombing and described it as “yet another vicious and cowardly act against a courageous member of Lebanon’s democratically-elected Parliament.”

“The aim of this attack can only be the silencing of yet another Lebanese political leader working for a sovereign and democratic Lebanon,” Rice said.

Asked if Washington believed Syria was behind the attack, State Department spokesman Sean McCormack said it was too soon to tell.

“That’s the first question that people ask: “Is Syria behind it?’ I can’t tell you at this point,” he told reporters. “But very clearly this is the work of those who intend or want to undermine Lebanese democracy.”

Damascus has denied any link with the killing of Hariri or the series of other assassinations and attempts against anti-Syrian figures in Lebanon.
Last Mod: 14 Haziran 2007, 10:42
Add Comment