More than 200 mayors from across the United States pledged to join efforts in fighting global climate change. 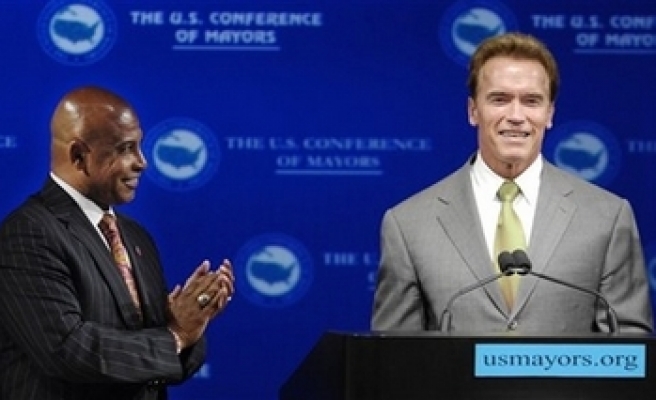 More than 200 mayors from across the United States pledged on Saturday to join efforts in fighting global climate change.

The mayors reached consensus at the U.S. Conference of Mayors being held that protecting the climate will be a central part of their efforts to strengthen the nation, according to conference sources.

Addressing the conference on Saturday, California Governor Arnold Schwarzenegger applauded the mayors for their support in fighting climate change.

"Whether it is (New York) Mayor Bloomberg using hybrids to create the largest and cleanest fleet of taxis in the world, or (Los Angeles) Mayor (Antonio) Villaraigosa transforming the L.A. Department of Water and Power to help reduce greenhouse gas emissions, your leadership is more important than ever," said Schwarzenegger.

"By taking action to make sure the people in your communities are doing their part for the environment, you are sending a powerful message to the federal government and to the rest of the world. And that is exactly what we have been doing in California."

More than 500 mayors have signed the Climate Protection Agreement to meet Kyoto greenhouse gas standards by 2012, according to Schwarzenegger.

To fight climate change, California is party to Memorandums of Understanding with other states, nations and Canadian provinces, including Arizona, New Mexico, Oregon, Washington, Utah, the State of Victoria in Australia, and British Columbia, Ontario and Manitoba in Canada, according to Schwarzenegger.

These agreements are important because they expand markets for clean fuels, cars and emissions credits across borders, allowing emission reductions at the lowest possible cost. California is working with other governments so that reporting, measuring, verifying and emissions markets have consistent protocols. Through the agreements, California is able to share and receive valuable information, such as academic research, effective policy initiatives, best practices and technological innovation.

Schwarzenegger introduced the Low Carbon Fuel Standard in January, which utilizes enforceable standards, market competition and flexible compliance to reduce emissions at the lowest cost and in the most consumer-friendly ways. By 2020, it will require a reduction in the carbon intensity of California's passenger vehicle fuels of at least 10 percent and is expected to more than triple the size of California's renewable fuels market, displace 20 percent of California's gasoline consumption with lower carbon fuels and put more than 7 million alternative fuel or hybrid vehicles on its roads without any new government spending.
Last Mod: 24 Haziran 2007, 17:10
Add Comment