The chief of the US military held talks with Pakistani President Pervez Musharraf and the army top brass Tuesday on his second visit in a month, officials said. 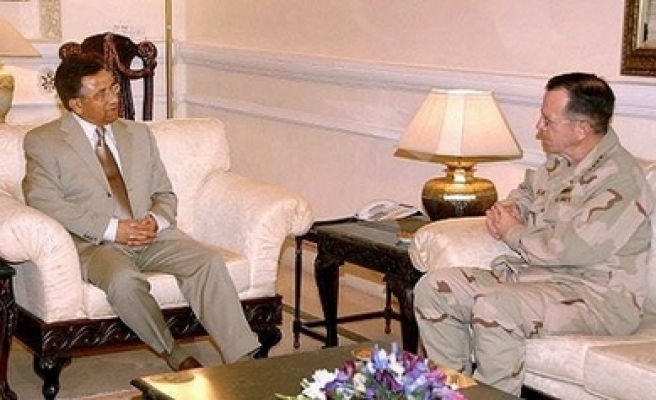 The visit by Admiral Mike Mullen, the chairman of the US joint chiefs of staff, coincided with a double suicide attack on a naval college in the eastern Pakistani city of Lahore on Tuesday that killed at least five people.

"He is here to continue developing the relationship military-to-military and to discuss a range of bilateral issues of mutual concern, including regional security," US Embassy spokeswoman Elizabeth Colton said.

Mullen held talks with Musharraf at the president's former army office in the garrison city of Rawalpindi, and had two meetings with army chief General Ashfaq Kayani, Colton said, without providing further details on their talks.

Colton said he was here to follow-up on his last visit to Pakistan in early February.

A Pakistani government statement said Musharraf and Mullen "exchanged on the ongoing cooperation between the armed forces of Pakistan and the United States in the war against international terrorism.

Separately, a Pakistani military statement said Mullen "remained with the chief of army staff (Kayani) for some time and discussed matters of professional interest with particular reference to (the) security situation in the region."

The Pentagon is planning to send about 100 US military trainers to Pakistan to assist a paramilitary force that is operating along the border with Afghanistan, The New York Times reported Saturday.

The newspaper reported last month that US officials recently reached a "quiet understanding" with Musharraf to intensify missile strikes in the area, such as one last week that killed 12 people.

The new arrangements included attacks by armed Predator drones operating from a secret base inside Pakistan, rather than Afghanistan, it said.