US military chief 'refused to quit'

Marine General Peter Pace, chairman of the US joint chiefs of staff, has spoken out publicly for the first time since the US administration's surprise decision to replace him. 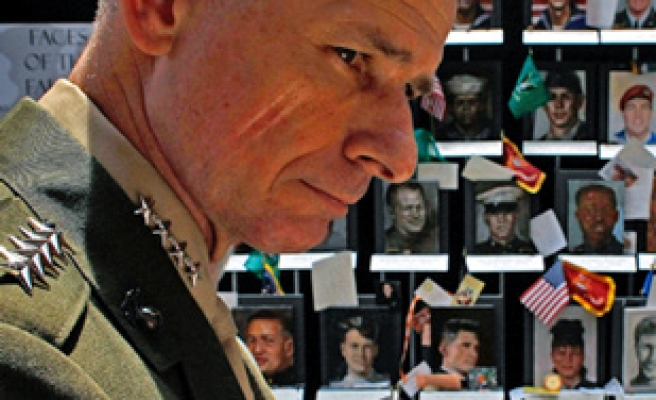 Pace said that he had turned down an offer to voluntarily retire rather than be forced out saying that to quit in wartime would have let down US troops in Iraq.


Pace, responding to a question from the audience as he spoke at the Joint Forces Staff College on Thursday, said he first heard that his expected nomination for a second two-year term was in jeopardy in mid-May.


Robert Gates, the US secretary of defence announced on June 8 that Pace was being replaced.

"One thing that was discussed was whether or not I should just voluntarily retire and take the issue off the table," Pace said, according to a transcript released on Friday by his office at the Pentagon. "I said I could not do that for one very fundamental reason," which is that no soldier or marine in should "think - ever - that his chairman, whoever that person is, could have stayed in the battle and voluntarily walked off the battlefield.

"That is unacceptable as a leadership thing, in my mind," he said.

Pace, whose current term ends on October 1, said he intended to continue as main military adviser to George Bush, the president, until then.

Navy Admiral Michael Mullen has been announced as Bush's choice to succeed Pace – he is the first marine ever to hold the military's top post.

The decision to drop Pace has increased the political debate over the war in Washington.

On Thursday, Harry Reid, the senate Democratic majority Leader, caused a stir when he said Pace failed in his job of providing congress with a candid assessment on the war.

Democrats have shied from criticising military officers and instead have focused on Bush and the administration policies in .

Asked for a comment on Reid's statement, Marine Colonel Katie Haddock, a spokeswoman for Pace, said he "is focused on his duties as chairman and is not going to respond to press reports on who's saying what. He will let 40 years of service speak for itself."

A veteran, Pace indicated in his comments that that experience coloured his decision not to quit voluntarily.

Pace was vice chairman of the joint chiefs during the run-up to the war and during the early years of the conflict.

In October 2005 he succeeded Air Force General Richard Myers as joint chiefs chairman, and until recently had largely been spared the criticism that senior civilian officials attracted.

The decision to sideline Pace came as a surprise, since Gates had indicated privately that he intended to recommend that the president renominate him.

In his remarks in , Pace confirmed that Gates had told him he preferred to keep him as chairman but in mid-May began to see signs of opposition in congress.

When he announced the decision last Friday, Gates said that after consulting with members of the senate he concluded that keeping Pace would risk a senate confirmation struggle focusing on the war.

"It would be a backward-looking and very contentious process," Gates said.

At the same time, he made clear he had made his decision with reluctance, saying he wished it had not been necessary.