American Muslims, like Muslim minorities in the West, concern themselves with eating halal meat, which usually focused on slaughtering animals according to Shari`ah. 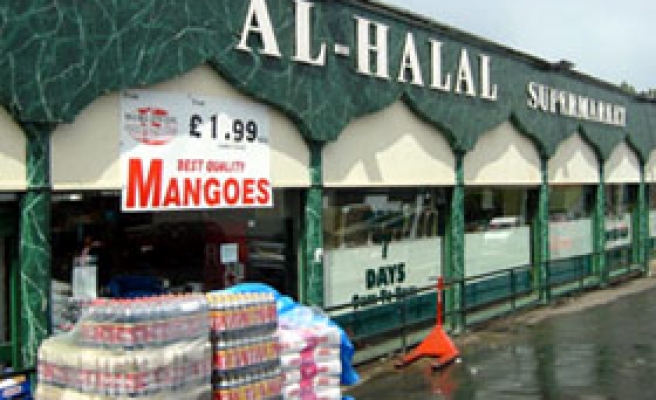 American Muslims, like Muslim minorities in the West, concern themselves with eating halal meat, which usually focused on slaughtering animals according to Shari`ah.

Discovering more about what animals are being fed before being shipped to slaughterhouses, whether Islamic or not, many Muslims are wondering what the term halal meat really implicates.

"I don’t think artificial means should be used to fatten up animals," Amina Khan, an alarmed 30-year-old housewife, told IslamOnline.net.

In the United States, it is common to feed chickens, turkeys, pigs and cows the blood, bone and unwanted flesh of farm animals mixed into their regular animal feed.

Most animals today are injected with hormones for them to grow large in short periods of time and are being intensively raised in small pens, cages and feedlots.

"It was terrible and filthy," said Zeenat Sultana, a 40 year-old school teacher, after watching a news segment showing chickens living in cramped conditions in dirty cages on an American factory farm.

Baby chicks routinely have their beak tips cut off without anesthesia and beef cattle are castrated and dehorned.

This system, developed to produce meat and dairy products in the most efficient manner and at a price affordable to consumers, has been termed "factory farming."

Imran Uddin, the son of a Bangladeshi immigrant who owns a Queens slaughterhouse, believes strongly in how animals should be raised and treated.

"Halal means more than just the slaughtering of an animal," he told IOL.

Upon entering the market, one is surrounded by several breeds of birds and ducks awaiting their deaths in cramped cages.

To the right is a room with goats and sheep munching on hay and drinking water from a large bucket.

"We can’t compromise Sunnah for time and convenience," says Uddin, who only slaughters animals raised on Amish farms in Pennsylvania.

He attests that the animals were fed on only vegetarian diets and were never injected with hormones.

None of his animals are branded and none of the birds are debeaked, a standard industry practice in American factory farming.

Several other halal live markets that were contacted for this story were unaware of the origin of the animals that they are selling to the public.

In addition to the growing popularity of Muslim-owned halal live markets in New York, many animal markets owned by non-Muslims also cater to the Muslim community.

IOL contacted two of these live animal markets in Queens that have a large Muslim clientele.

Two live animal markets located in Brooklyn, including one that slaughters animals raised in Texas, were unable to testify that their animals were fed a vegetarian diet or that they were not injected with hormones.

Halal meat stores and live markets are considered places where animals are shielded from such practices.

However, consumers of halal meat may now want to think twice before buying that ground beef or chicken from the local halal meat store.

The food that the animal was raised on is often overlooked by many players in the halal meat business.

According to the "Halal/Zabiha" standards of the Islamic Society of North America’s Canadian Halal Certification Agency, which provides halal certification in both Canada and the United States, the manner in which animals are raised before they are slaughtered is not a component of their certification process at all.

"There is a difference of opinion on this issue, but how far can you go?" Dr. Mohammed Ashraf, Secretary General of ISNA’s Halal Certification Agency, told IOL.

"I believe that if what is fed to animals becomes harmful to humans then it should be avoided."

Dr. Ashraf believes, however, that the products that are being fed to farm animals are not causing any harm to human beings.

Thus, he does not think that this is a topic to really be concerned about because there haven't been any major recent health-related outbreaks.

"I don’t think that we should drag our feet into this," Ashraf said regarding the examination of what exactly is put into animal feed.

ISNA’s halal certification agency is in charge of Maplelodge Farm, one of the largest chicken processing plants in Canada.

Similarly, Dr. Muhammad Chaudry, Director of the Islamic Food and Nutrition Council of America (IFANCA), does not believe animals being raised on strictly vegetarian feed is a requirement in Islam.

He does not guarantee that every animal that is slaughtered under their seal has been raised on vegetarian feed.

IFANCA makes sure that chickens that are slaughtered on the three poultry slaughterhouses that they supervise are kept on a vegetarian diet for 15 days before slaughter.

Dr. Chaudry, however, could not guarantee that many of the approximately 100 meat products companies certified by IFANCA follow the same protocol.

Sheikh Ahmad Kutty, a senior lecturer and a scholar at the Islamic Institute of Toronto, Canada, disagrees.

"The concept of halal meat in Islam must go beyond the rituals of slaughtering to include the way the animals are raised," he told IOL.

"For, according to the Qur'anic notion of fitrah, and nature of things, the cattle aren't meant to feed on animal bits; rather they are by nature created to be nourished by plants and grains.

"We don't have to be scientists to know that when we interfere with such basic laws of nature we don't really know the consequences. And the questions are indeed grave as we can tell from the causes of mad cow disease!"

The outbreak of Bovine Spongiform Encephalopathy (BSE) — better known as Mad Cow disease — in the UK was a result of cattle eating brain and spinal cord remnants of other cattle.

"It is therefore imperative for Muslims to look into the ways the animals are nurtured and raised in determining the criteria of halal slaughter," insisted the scholar.

"This is a greater priority for us Muslims than simple rituals of Zabihawe are obsessed with."

"It is not enough to do zabiha slaughter in the end. It has to be a consistent compassion as much as possible that is practiced throughout the animal’s life," he said in a recent interview with a Toronto radio show.

As more and more Muslim-owned live markets are popping up, Muslims are encouraged to cut the middle man and consider running their own farms.

"Ninety-nine percent of all the food industries in the United States are owned by non-Muslims," said Chaudry.

"If we had our own farms and slaughterhouses, things would be different."