US navy stages show of force off Iran coast

Nine US warships carrying 17,000 personnel have entered the Gulf in a show of force off Iran's coast. 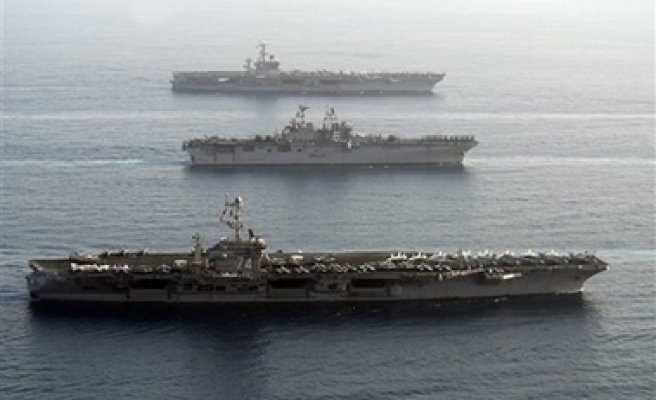 Nine US warships carrying 17,000 personnel have entered the Gulf in a show of force off Iran's coast.

Navy officials said on Wednesday that this was the largest daytime assembly of ships since the 2003 Iraq war.

The group of ships crossed the Straits of Hormuz at roughly 03:55 GMT on Wednesday.

Rear Admiral Kevin Quinn, the group leader, said the ships would conduct exercises as part of a long-planned effort to assure regional allies of US commitment to Gulf security.

Navy officials said the decision to send a second aircraft carrier was made at a last minute, without giving a reason.

US navy officials said Iran had not been notified of plans to sail the ships, which include two aircraft carriers, through the Straits of Hormuz, a narrow channel in international waters off Iran's coast and a major artery for global oil shipments.

"There's always the threat of any state or non-state actor that might decide to close one of the international straits, and the biggest one is the Straits of Hormuz," he said on board the USS John C Stennis aircraft carrier.

"What is special about this is that you have two strike groups. Everybody will see us because it is in daylight."

Most US ships pass through the straits at night so as not to attract attention, and rarely move in such large numbers.

Tension between the US and Iran over Tehran's nuclear ambitions and Iraq has raised regional fears of a possible military confrontation that could hit Gulf economies and threaten vital oil exports.

The move comes less than two weeks after Dick Cheney, the US vice-president, speaking aboard the Stennis during a tour of the Gulf, said the US would stand with others to prevent Iran gaining nuclear weapons and "dominating the region".

On a visit to Abu Dhabi a few days later, Mahmoud Ahmadinejad, the Iranian president, threatened "severe" retaliation if the US attacked his country, which is locked in a standoff with the US over its nuclear programme.

He also urged Gulf countries to "get rid of" foreign forces, blaming them for insecurity in the region.

The US accuses Iran of trying to produce nuclear weapons, and has sought tougher UN sanctions against Iran. Iran says its nuclear ambitions are for energy purposes only.