Outgoing British Prime Minister Tony Blair will be named on Wednesday as special envoy for the int'l diplomatic Quartet on the Mideast with a portfolio focused on Palestinian economic and political reform, a senior U.S. official said. 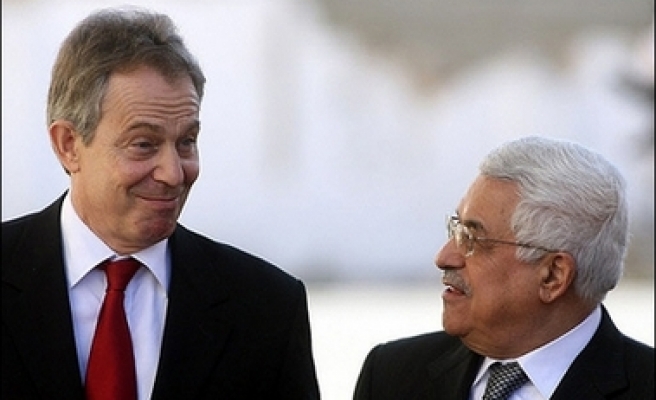 Outgoing British Prime Minister Tony Blair will be named on Wednesday as special envoy for the international diplomatic Quartet on the Middle East with a portfolio focused on Palestinian economic and political reform, a senior U.S. official said.

Members of the quartet, the United States, United Nations, European Union and Russia, will give their public blessing and announce that Blair has agreed to take the job in simultaneous statements from their capitals and New York, the official told The Associated Press.

The official, who insisted on anonymity because the statements are still being drafted, spoke after being briefed on a meeting of quartet representatives held earlier Tuesday in Jerusalem.

The quartet gathering came a day after the Israeli, Palestinian, Egyptian and Jordanian leaders held a summit in a unified stance against Hamas takeover of the Gaza Strip.

Three U.S. officials said Monday that discussions on naming Blair to the envoy post had been completed and the issue was on the Quartet's Tuesday agenda.

Blair himself did not rule out the idea on Tuesday.

"I think that anybody who cares about greater peace and stability in the world knows that a lasting and enduring resolution of the Israeli-Palestinian issue is essential," he said in London. "As I have said on many occasions, I would do whatever I could to help such a resolution come about."

"They have talked about the idea ... of having an envoy, having someone who would be available on behalf of the quartet to work on a variety of issues, including efforts to help support the development of Palestinian Authority institutions," Casey told reporters.

The senior U.S. official said the quartet had agreed on a job description for the special envoy position that Blair will assume shortly after leaving office on Wednesday, the senior official said, disputing reports in the Israeli media that Russia was holding up an official announcement.

Blair's new job will deal primarily with helping the Palestinian Authority build political institutions and will not, at least at first, involve direct mediation or negotiation between the Palestinians and Israelis, the official said, noting that the quartet itself "retains the right to be the interlocutor between the Israelis and Palestinians."

The post is expected to be unpaid but will come with staff and logistical support, as did a previous similar position held by the former World Bank chief James Wolfensohn, who had a narrower job description.

"The job is not just about economics, but it should not be mistaken as a mediator or negotiator," the official said.

Both Israeli and Palestinian officials reacted positively to the prospect of Blair's involvement in peace efforts. "Tony Blair is a very well-appreciated figure in Israel," said Foreign Minister Tzipi Livni.

Fahmi al-Zaarer, a spokesman for Abbas' Fatah movement, said the Palestinians would welcome Blair. "We believe that Mr. Blair's efforts would help ... revive the political process."

At Monday's summit, the leaders committed to work for the resumption of Israeli-Palestinian peace talks, which have been stalled since 2001. The quartet are the sponsors of the 2003 "road map," a peace plan that never got off the ground.
Last Mod: 26 Haziran 2007, 21:50
Add Comment