A US official has described the presidential referendum held in Syria last week as "peer theater" and an attempt to gain legitimacy in an electoral framework that did not meet international standards. 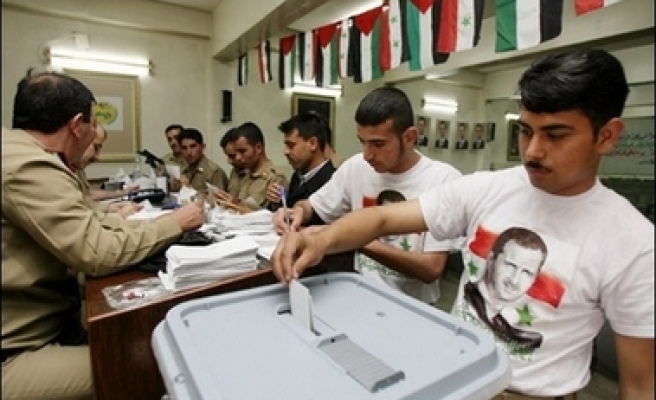 A US official has described the presidential referendum held in Syria last week as "peer theater" and an attempt to gain legitimacy in an electoral framework that did not meet international standards.

A referendum, held in Syria last Sunday, gave Syrian President Bashar Al-Assad another seven years in office with 97 percent of the vote while many Syrian opposition groups criticized the electoral process.

"We urge the government of Syria to have a real democratic process that allows the Syrian people a real voice and choice in their leadership," said Deputy Assistant Secretary of State J. Scott Carpenter in a press briefing to a small group of Arab reporters based in Washington last night.

Carpenter argued that the government of Syria is wrong to think it can "buy out time" with the United States and the international community adding that "it is critical for Syria move away out of its isolation to a more globalized environment."

"Talking to a regime that resorts to this kind of sham process to justify its legitimacy has negligible benefits in the long run," he added answering in reference to a possible renewal of Ambassadorial-level diplomatic relations between Damascus and Washington.

The United States recalled its ambassador from Damascus in 2005, shortly after the assassination of former Lebanese Prime Minister Rafiq Hariri in a massive car bomb in downtown Beirut as the Syrian government emerged as the main suspect.
Damascus has repeatedly denied any involvement in Hariri's assassination, and said it was willing to cooperate in the investigation.

But Carpenter said Washington was willing to continue talking with Syria, brushing off suggestions that the US has shown signs of "weakness" when it agreed to hold high-level talks with Damascus.

"It is a profound miscalculation to assume that the willingness of the United states to talk is a sign of weakness," affirmed Carpenter.

Secretary of State Condoleezza Rice met with her Syrian counterpart earlier this month on the sidelines of the two-day International Compact on Iraq in the Egyptian resort of Sharm El-Sheikh.

Carpenter noted that Rice shared with Mouallem "deep profound concerns about a number of issues." "The question is not about whether or not to talk with someone, it is about the outcome of those discussions," he said, adding that these talks will continue to focus "on narrow subjects related to Iraq and not on broader issues." "As long as the Syrian government continue to sponsor and spread terrorism in the region and continue to deprive the Syrian people of a real choice, we will continue to pressure it," he added.

Carpenter acknowledged that the United States disagrees with the Syrian opposition about the change of regime policy, "but the common ground is that we both want to see a democratic Syria emerged." "We are deeply concerned by the abundance of information that indicates that Syria is supporting the creation of the environment in which these violent events are taking place, said Carpenter answering a question about the recent events in Lebanon where violent clashes were seen between the Lebanese security forces and Fatah Al-Islam, in Nahr Al-Bared Palestinian refugee camp in Northern Lebanon.

"We are concerned that this violence is being perpetuated by terrorist groups known to be affiliated with Syria; this is an indication that Syria is not serious about changing its relationship to us or to the rest of the region, " he added.

"We will not sacrifice Lebanon for the sake of achieving other goals," concluded Carpenter. Last Mod: 30 Mayıs 2007, 10:44
Add Comment