The United States handed over $10 million in bounties to four Muslim men in the southern Philippines on Thursday for their role in the killing of two leaders of the country's Islamic group. 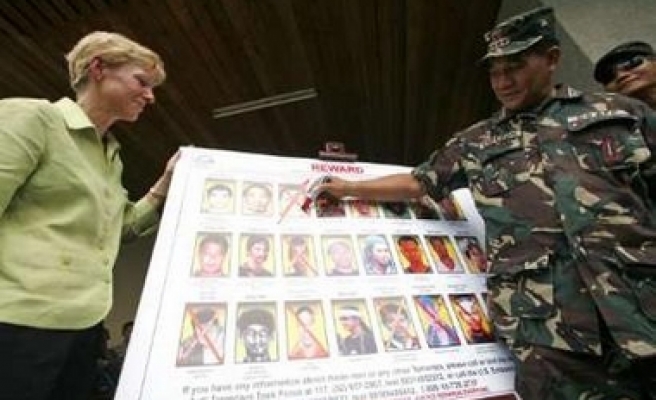 The United States handed over $10 million in bounties to four Muslim men in the southern Philippines on Thursday for their role in the killing of two leaders of the country's Islamic group.

U.S. ambassador Kristie Kenney handed over briefcases containing crisp 1,000-peso bills to the men on the southern island of Jolo. They wore black hoods during the ceremony to conceal their identities.

Two of the men were former Abu Sayyaf rebels who turned themselves in and led Philippine soldiers to the grave of their leader. They shared $5 million.

Two Muslim farmers who tipped off army commandos about another leader who was then killed in a gunbattle in January shared another $5 million bounty.

"I will be proud to give another $10 million to any citizen who will step forward to keep the rest of us safe," Kenney said. The briefcases contained only a symbolic amount of money, and each man would receive $2.5 million, officials said.

It was the highest bounty ever given in the Philippines.

The two former rebels led troops to the exact spot where Abu Sayyaf chief Khaddafy Janjalani was buried after being mortally wounded in a gunbattle on Jolo last year.

Information from the two farmers helped troops track down and kill Abu Solaiman, the spokesman for the group and also known as "the engineer".

Both men were on the U.S. Federal Bureau of Investigation's list of wanteds.

The Abu Sayyaf group was blamed for the worst terrorist attack in the Philippines, the bombing of a ferry near Manila bay in February 2004, killing more than 100 people.

General Hermogenes Esperon, the Philippine military chief, said three of the informers had opted to be relocated outside the tiny island of Jolo for safety reasons.

"One of them was brave enough to stay behind with his family but we're committed to provide him adequate security," Esperon told reporters.

Esperon said the hunt for the remaining leaders of Abu Sayyaf and a handful of Jemaah Islamiah leaders, including Indonesians Dulmatin and Umar Patek, would continue without let up until "we have crushed them".