Though the next president will probably command soldiers in two separate wars, few of those hoping to win the job can say they've ever seen combat or even taken abuse from a drill sergeant. 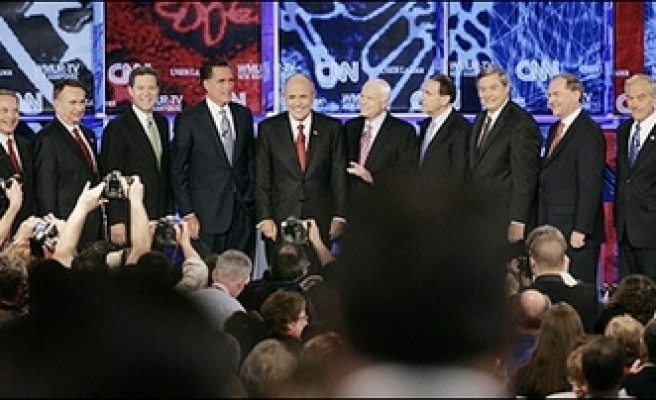 Though the next president will probably command soldiers in two separate wars, few of those hoping to win the job can say they've ever seen combat or even taken abuse from a drill sergeant.

Of the 18 announced Democratic and Republican presidential candidates, only Republicans John McCain and Duncan Hunter have served on the front lines. Three others served in noncombat roles and another two served in the reserves.

"I just don't think we expect that obligation, and that's because we don't expect it of ourselves either," said Bruce Altschuler, a Vietnam veteran and political science professor at the State University of New York at Oswego.

That might allow voters and candidates to focus on the wars in Iraq and Afghanistan, said Ohio Wesleyan University history professor Michael Flamm.

"If no candidates in 2008 are running on or against their Vietnam records, perhaps we won't have to look at Iraq through the prism of Vietnam," he said. "Perhaps we will be able to look at the Iraq war as a new situation."

Between 1944 and 1992, military experience was seen as a must for presidents.

Republican George W. Bush, who spent the Vietnam years on U.S. soil as a member of the Air National Guard, defeated two Democratic candidates who served in Vietnam, Al Gore and John Kerry.

That won't be a concern for many running in the November 2008 election.

Republicans Sam Brownback and Mike Huckabee and Democrat Barack Obama had not yet turned 18 by the time the draft was discontinued in 1973.

Democrat John Edwards, who became eligible in the waning years of the war, drew a high lottery number that was not called when the lottery determined who would be inducted into military service.

College and missionary service kept Mitt Romney out of the draft until 1970, when he drew a high lottery number.

Rudy Giuliani also drew a high lottery number in 1970 after receiving deferments as a student and law clerk.

Republican Fred Thompson, who is expected to formally enter the race soon, received a deferment because he had children.

As a woman, Democratic Sen. Hillary Clinton was not subject to the draft.

McCain's biography as a Navy airman who endured years of torture in a Hanoi prison is a central part of his appeal. Hunter, a decorated Vietnam War veteran, has made military issues central to his career in Congress.

Democrat Chris Dodd joined the Army Reserve when he left the Peace Corps in 1968. Republican Tommy Thompson joined after law school in 1966.

The candidates' collective lack of military experience reflects the population as a whole.

"Service in the military provides perspective on war, perspective on sacrifice," said University of Denver political -science professor Tom Knecht. "To the extent that we're losing that, that might be kind of a problem."