US, Russia fail to agree on missile shield

Russia and US failed to agree on U.S. plans to deploy parts of a missile shield in eastern Europe. 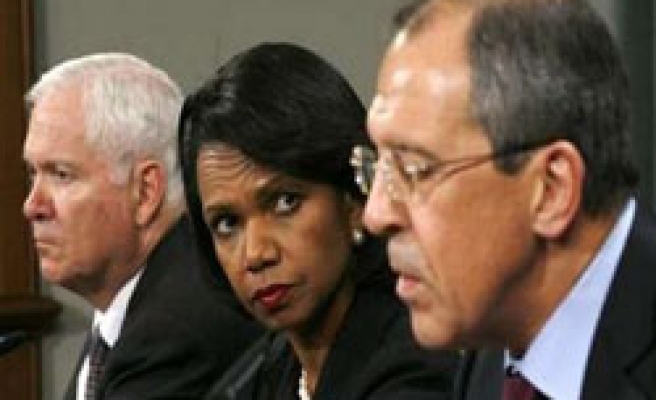 Russia and the United States failed on Tuesday to agree on U.S. plans to deploy parts of a missile defense shield in eastern Europe, one of several issues that have driven their relations to a new post-Cold War low.

Russian Foreign Minister Sergei Lavrov said talks with U.S. Secretary of State Condoleezza Rice and Defense Secretary Robert Gates had also produced no agreement on how to replace a cornerstone pact on long-range nuclear weapons when it expires.

Announcing the failure to agree, Lavrov told a news conference: "...I mean first and foremost on the missile shield plan and the future of the START treaty after it expires next year."

Moscow opposes the proposed missile shield, saying its deployment in former Soviet satellites Poland and the Czech Republic will threaten Russia's security. Washington says it is needed as protection against "rogue states."

Lavrov, acknowledging that Washington seemed determined to deploy the shield, said Russia should focus on mitigating what it sees as the risks from it.

"Given that the United States firmly plan to create the (shield in eastern Europe), we have appreciated that while disagreeing with us in substance, they agreed that their project fuels our concerns and offered proposals aimed at lifting or easing these concerns," he said.

He appeared to be referring to earlier U.S. proposals that would allow the Russians to inspect shield installations and a U.S. undertaking not to activate the shield until there was firm evidence of "Iran's capability of launching long-range missiles".

Putin referred to the document on Monday when he saw Rice and Gates. He said U.S. President George W. Bush had sent him a letter which offered a chance to improve relations.

Diplomatic relations between the United States and Russia have hit a post-Cold War low although trade between them increased to $17.5 billion last year, from $15 billion in 2006, and U.S. companies have invested heavily in Russia.

Russia had hoped to persuade Gates and Rice, who were making their second trip to Russia in five months, to agree to a formal document to replace the Strategic Arms Reduction Treaty (START) treaty which expires next year.

As at a similar meeting between U.S. and Russian foreign and defense ministers last October, there was little progress on the main issues dividing the two sides.