The United States ambassador in Baghdad said he and his Iranian counterpart agreed broadly on policy toward Iraq during four-hour groundbreaking talks on Monday, but insisted that Iran end "its support for militants". 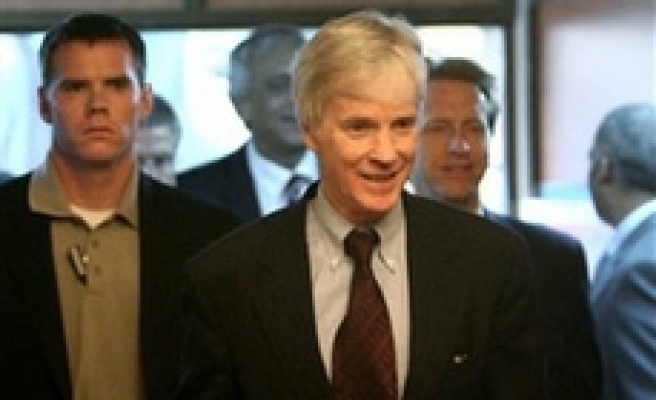 The United States ambassador in Baghdad said he and his Iranian counterpart agreed broadly on policy toward Iraq during four-hour groundbreaking talks on Monday, but insisted that Iran end "its support for militants".

During a meeting that U.S. Ambassador Ryan Crocker described as businesslike and focused solely on Iraq, the American said Iran proposed setting up a "trilateral security mechanism" that would include the U.S., Iraq and Iran. Crocker said the proposal would need study in Washington.

"This is about actions not just principles, and I laid out to the Iranians direct, specific concerns about their behavior in Iraq and their support for militias that are fighting Iraqi and coalition forces," Crocker told a Green Zone news conference.

The Baghdad talks were the first of their kind and a small sign that Washington thinks rapprochement with Iran is possible after more than a quarter-century of diplomatic estrangement that began with the 1979 Islamic revolution.

Crocker said the Iranians wanted to propose a second session.

"We will consider that when we receive it," Crocker told reporters in the U.S.-controlled Green Zone. "The purpose this meeting was not to arrange other meetings."

"The focus of our discussions were Iraq and Iraq only," Crocker said.

In the course of the meeting, Ali al-Dabagh, a government spokesman, told reporters that the session was proceeding cordially.

"There are good intentions and understanding and commitment between the two countries," al-Dabagh told reporters.

Al-Maliki did not attend the meeting, but the prime minister greeted the two ambassadors, who shook hands, and led them into a conference room, where the ambassadors sat across from each other.

Speaking in Tehran, Iranian Foreign Minister Manouchehr Mottaki said Monday the talks could lead to future meetings, but only if Washington admits its Middle East policy has not been successful.

"We are hopeful that Washington's realistic approach to the current issues of Iraq by confessing its failed policy in Iraq and the region and by showing a determination to changing the policy guarantees success of the talks and possible further talks," Mottaki said.

"The American side has accusations against Iran and the Iranian side has some remarks on the presence of the American forces on Iraqi lands, which they see as a threat to their government," al-Dabagh said.