U.S. scientists have developed a way to add color to medical scans known as MRIs, potentially enhancing the information and sensitivity the images provide, they said on Wednesday. 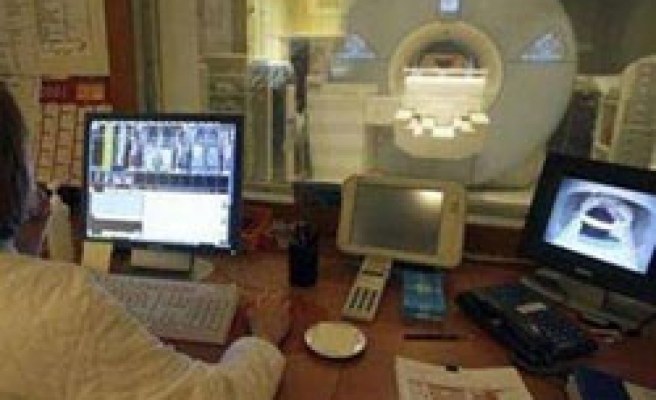 MRI stands for magnetic resonance imaging. The technique uses a magnetic field and radio waves to get cross-sectional images of organs and structures the inside the body. Chemical contrast agents help enhance the quality of the images, but they are typically only in shades of gray.

"Once you put things in different colors, you can get a lot of different information out than you can in black and white," said Gary Zabow of the National Institute of Standards and Technology, whose research appears in the journal Nature.

"You might imagine having a normal cell in blue and a cancer cell in red. You can track those cells in the body and see how they behave," Zabow said in a telephone interview.

Instead of using conventional chemical contrast agents to improve MRI image quality, Zabow and colleagues fabricated tiny magnets that could be made using the same methods used by silicon chip makers to develop advanced computer chips.

"We are able to engineer whatever color we want to by changing the exact geometry of the particles we make," Zabow said.

Each micromagnet consists of two round discs stacked on top of each other with a gap in the middle. As water flows between the discs, protons within the water's hydrogen atoms generate radio-frequency signals.

Zabow thinks the design of the magnets may make them easier to customize than conventional injectable MRI contrast agents, which are made through a chemical synthesis process.

Zabow and colleagues at NIST and the National Institutes of Health fashioned their micromagnets out of nickel, a substance that is toxic to humans. But Zabow said they could just as easily be made out of iron or other magnetic materials. "That is essentially nontoxic," he said.

Zabow said the finding is very early and a long way from testing in humans. "What we are doing here is demonstrating a new idea," he said.