US seeks to direct Afghans by building 'super-madrassas'

American forces, Afghans say kill civilians in the recent attacks are planning to build madrassas to show their "respect for the culture and religion". But they say they will try to control over the curriculum according to Telegraph's report on Sunday. 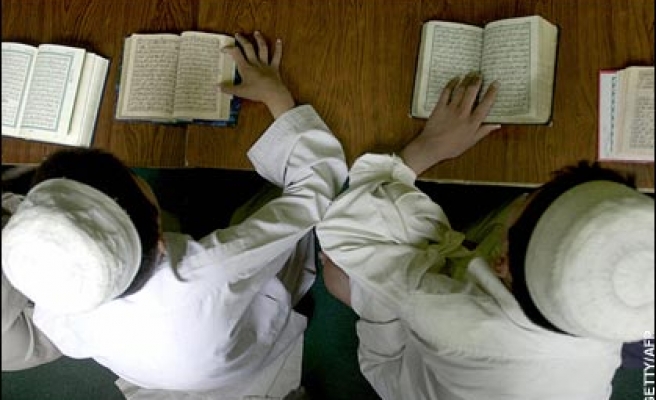 American forces, Afghans say kill civilians in the recent attacks are planning to build madrassas to show their "respect for the culture and religion". But they say they will try to control over the curriculum according to Telegraph's report on Sunday.

American forces in Afghanistan are building madrassas in an attempt to persuade parents not to send their children across the border to Pakistan for religious schools,

Work has started on two "super-madrassas" in Paktika, which borders Pakistan, and more are planned. The American government is also paying for the refurbishment of mosques in the area, in the hope of "winning over religious leaders".

The coalition has been under growing pressure over the deaths of civilians and American military commanders say they hope the moves will convince Afghans - many of whom rely on madrassas to provide bed and board for their children - that they are on the same side.

"We are saying that we respect their culture and religion," said naval commander Eduardo Fernandez, the man in charge of American aid efforts in the Sharana district of Paktika. "We have to give the religious leaders the respect they feel they deserve."

Each madrassa will accommodate 1,000 boarding pupils, all of them boys.

The US military insists that the schools, which it calls "centres for educational excellence", will be administered by the Afghan education ministry, but accuses there is a risk that they will be vulnerable to Islamic preachers.

"In Afghan terms it is a madrassa, but those words have baggage and if word gets back to a Western public that we are building madrassas, that is a bad thing," said Major Jason Smallfield, 37, an American officer in Sharana.

The governor is trying to ensure that there is some sort of "control over the curriculum", to ensure that "radical" Islam is not being fomented through these schools."

More than five years after the fall of the Taliban, education remains a battleground in Afghanistan. For many children, the choice is still a religious education.

Parents wanted their children to go to school, said Amngul Didargul, a teacher, because they had noticed the improvement in their behaviour. But Mr Mirafzal said many parents, who could not afford to feed their children and keep them warm through the winter, found it simpler and safer to send them to madrassas in Pakistan.

At the Qali Aday school outside Kabul, the British charity Save the Children covers much of the cost of educating 570 pupils, aged from six to 17, in subjects including geography, history, science and English.
Last Mod: 13 Mayıs 2007, 19:25
Add Comment