The US senate has rejected plans by George Bush, the US president, to overhaul immigration rules that would have allowed immigrants working illegally to seek US citizenship. 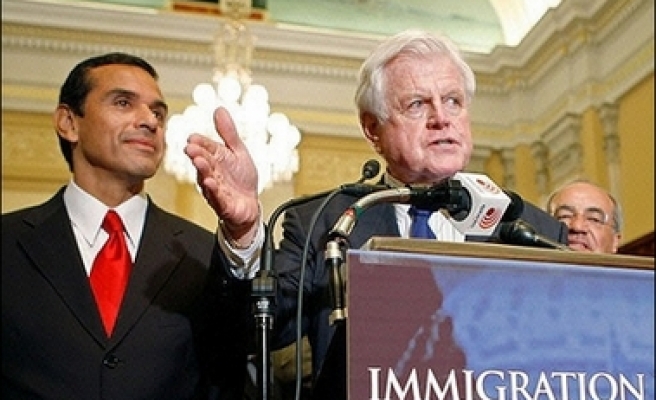 The US senate has rejected plans by George Bush, the US president, to overhaul immigration rules that would have allowed immigrants working illegally to seek US citizenship.

On Thursday, the legislation fell 14 votes short of the 60 needed to take it to a final vote and it is unlikely to be revived before next year's presidential election.

Rosa Rosales, the president of the US League of United Latin American Citizens, said it was unlikely congress would return to immigration reform before next year's presidential election.

"No one benefits now, there is nothing to look forward ... it's very disappointing," Rosales said.

The legislation was the result of months of negotiations between a group of Republican and Democratic senators and the White House.

Bush, speaking on Thursday at a naval war college in Newport, expressed "disappointment" with the collapse of the bill and said the outcome was "unacceptable" to the American people.

Bush has sought an overhaul of US immigration laws for years but the senate's rejection of the bill exposed divisions among his own party.

Republicans opposing the bill called it an amnesty for the US's estimated 12 million illegal immigrants, said it would do little to stem illegal immigration and rejected a promised $4.4bn to pay for more border security.

The bill tied tough border security and workplace enforcement measures to a plan to legalise illegal immigrants and create a temporary worker programme.

It would also have created a new merit-based system for future immigrants.

Opponents of the bill said Bush should instead concentrate on keeping illegal immigrants out.

"The next step is to immediately push the president to take up his word and enforce security at the border," said senator David Vitter, a Louisiana Republican who voted against the bill.

Some labour unions also opposed the bill, saying its proposed temporary worker programme would have created an underclass of cheap labourers.

This was the second time in as many weeks that the Senate has tried to pass the legislation.