A US timeline for bolstering Israeli-Palestinian talks has met its first resistance as Israel says it can not commit to some of the demands, citing security concerns. 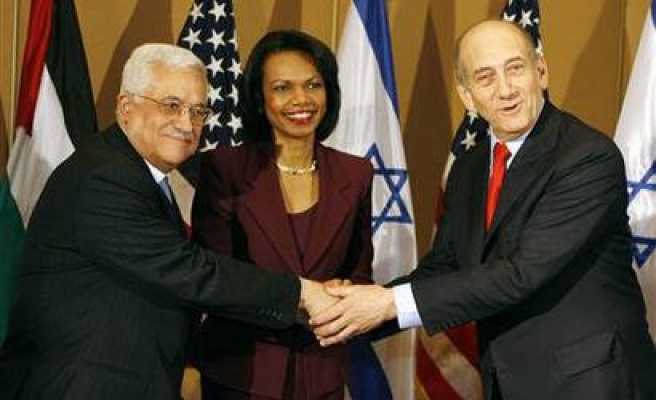 A US timeline for bolstering Israeli-Palestinian talks has met its first resistance as Israel says it can not commit to some of the demands, citing security concerns.

The timeline asks the Palestinian president to start deploying his forces by the middle of next month to halt rocket fire and smuggling by armed groups.

It also asks Israel to reciprocate by taking steps to ease the movement of people and goods between the Gaza Strip and the occupied West Bank.

But it is unclear how hard the Bush administration is prepared to push the parties to complete a list of so-called "benchmarks".

Israeli officials raised concerns that Israel was being asked to ease restrictions on Palestinian movements without assurances that Abbas has completed his own commitments on security.

While Israel appeared prepared to lift restrictions in the West Bank starting this month, it has serious reservations about other demands, including one that would allow Palestinian bus convoys to travel between Gaza and the West Bank by July 1, officials said.

"Some of the ideas Israel is already implementing, others are already well advanced, and there are some that Israel will not be able to address in the present because of security concerns," an official in Olmert's office said.

Israeli resistance to elements of the US plan followed an earlier rift between the allies over Washington's decision to hold limited contacts with non-Hamas ministers in the Palestinian unity government.

Olmert is boycotting the cabinet in its entirety.

The US timeline calls on Abbas's security forces to form "joint co-ordinating cells" with Israeli and Egyptian forces by June 1 to bolster security at the Egyptian border.

By June 15, Abbas would deploy his forces along the border, from a key Israeli crossing point to the Mediterranean coast, to stop smuggling and destroy tunnels used by armed groups.


Under the US timeline, Abbas's national security adviser, Mohammad Dahlan, a bitter foe of Hamas, would develop a plan to prevent rocket attacks against Israel and begin deployments by June 21.

The US document asks Israel to allow the transfer of weapons, ammunition and other equipment for security forces under Abbas's direct control in the West Bank and Gaza.


The timeline calls for increased training and equipping of Abbas's forces until the end of this year.

Diplomats said Condoleezza Rice, the US secretary of state, was committed to the effort despite the hurdles, and that she hoped to draw up a blueprint, or "rubric", that both sides would commit to, possibly in writing.

Washington hopes these measures will create conditions for talks on a final peace deal, but Olmert, who has agreed to push forward with the benchmarks, is unpopular in Israel and may be forced out of office over last year's Lebanon war. Last Mod: 04 Mayıs 2007, 15:37
Add Comment