US space shuttle poised for launch on Friday

NASA is finally ready to fly its first mission of the year, with space shuttle Atlantis and seven astronauts scheduled for liftoff at 7:38 p.m. EDT on Friday from the Kennedy Space Center in Florida. 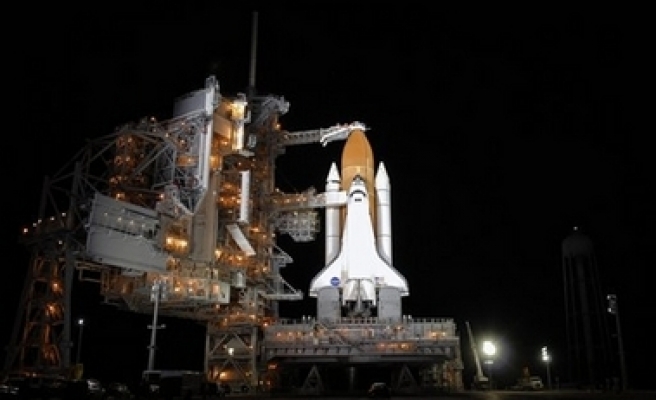 NASA is finally ready to fly its first mission of the year, with space shuttle Atlantis and seven astronauts scheduled for liftoff at 7:38 p.m. EDT on Friday from the Kennedy Space Center in Florida.

Meteorologists were predicting clear skies at launch time with only a 20 percent chance of a delay due to possible thunderstorms.

The US space agency had planned to launch its second flight of the year this month, not its first, but Atlantis was pummeled during a freak hailstorm on Feb. 26, which delayed its planned mid-March takeoff.

Technicians fixed thousands of dings, dents and gouges in the tank’s insulating foam. The patched areas are clearly visible, as the new foam has not had time to oxidize and yellow in the sun like the rest of the tank. Despite its appearance, NASA managers are confident the repaired foam will hold together during Atlantis’ climb into orbit.

Since the deadly 2003 Columbia accident, the space agency has been particularly sensitive to issues involving fuel tank foam. Columbia’s tank shed a piece of insulation during liftoff, which smashed into the ship’s wing and broke a hole in its heat shield.

The shuttle was destroyed as it attempted to fly through the atmosphere for landing 16 days later, killing all seven astronauts aboard.

Recovery from the accident put NASA three years behind schedule in finishing the space station. The agency needs to fly at least 13 more missions to deliver all the major components before the fleet is retired in 2010.

It also plans two flights to stash spare parts on the station and a last service call to the Hubble Space Telescope.

Atlantis will deliver two new segments of the International Space Station’s metal spine. The trusses include a huge pair of solar wing panels and a rotary joint so the wings can track the sun for power.

The Atlantis crew also needs to fold an old panel that will be moved to another location on the station next year.

During NASA’s last shuttle mission in December, the astronauts faced similar tasks and ended up having to make an unplanned spacewalk to coax a jammed panel into a storage box.

This time, NASA has backup plans and two extra days’ fuel and supplies in case the mission has to be extended beyond the planned 11 days. Last Mod: 08 Haziran 2007, 11:23
Add Comment