US Students on Know Muslims Tour 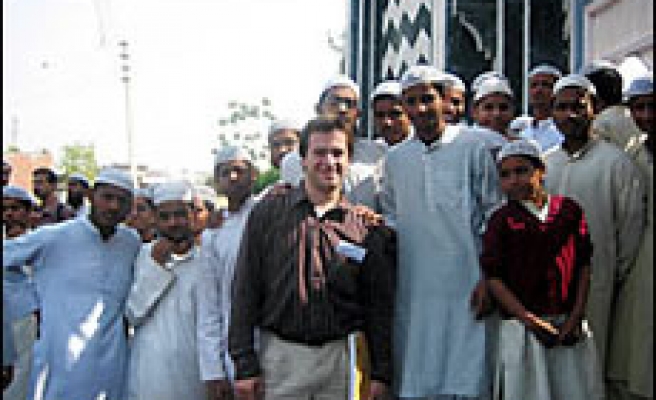 "Stereotypes I had that Muslims were ignorant of what was going on in the world, that they hated Americans were very much challenged," said Texan Hailey Woldt, a junior at Georgetown University in Washington.

The unprecedented trip was organized and led by Akbar Ahmed, an anthropologist on contemporary Islam at the American University in Washington.

From the mosques of Damascus to the madrasahs of Karachi and the malls of Jakarta, they listened to the fears, hopes and beliefs of everyday Muslims.

The group gave voice to students, professors, imams, premiers and cab drivers to speak up on how they view the US and the West.

"I was amazed at how much they read. They listen to CNN and BBC and were very informed about American politics," said Woldt.

"I was overwhelmed by the hospitality and open-mindedness."

Frankie Martin, another student, noted that even the most conservative Muslims welcomed dialogue with his group.

The students also found wrong conceptions about the American society in some of the visited countries.

"They think Americans just don't care [about understanding Islam] and think all Muslims are evil or terrorists," said Martin, a graduate of the American University in Washington.

"They say, 'We get your media and see how you view Islam, but you don't get our media.'"

Although they have access to American media, the young Muslims the students met often knew little about Islam in the US.

They described who students at a mosque in India were stunned and overwhelmed when they met hijab-clad Hadia Mubarak, an American Muslim of Syrian-Jordanian background.

"They had this perception there were no Muslims in America," she said.

"And I could tell them I'm able to cover my hair, that I go to mosque, and there are millions of Muslims like me."

There are between six to seven million Muslims in the United States, making up less than three percent of the country's 300 million population.

While many in the West see Muslims as fanatical, violent, and intolerant, Muslims generally view Westerners as selfish, immoral and greedy, said the survey.

In a report to the UN, the high-level Group of the Alliance of Civilizations concluded that the yawning divide between Islam and the West does not have its roots in religious differences but rather political conflicts.

Mubarak insists it was "the duty of my generation to understand and do something."

Akbar Ahmed, an anthropologist on contemporary Islam at the American University in Washington and the organizer of the trip, agreed.

"But someone who knows little about America and may never have traveled abroad and is open to discussion, I'm prepared to spend time and money to talk with that person," added Pakistani-born Ahmed.

"In the end, I may convert someone important to a different way of thinking."

Ahmed, who has been a prominent voice promoting interfaith dialogue for years, believes that young Americans are the best ambassadors America could have in the Muslim world.

He insists that they can make a difference because they are simply more willing to listen.

He cited the case of Indian Aijaz Qasmi – a chief Deoband ideologue – as a case in point.

Qasmi, who feels his way of life and religion are facing an onslaught militarily and culturally, had insisted that acts of people like bin Laden were justified.

But after long discussions with the group, he approached Ahmed and asked if he could translate his book on the need for discussion between the cultures for the Muslim world to read.

"We were the first Americans he ever met, and now his translation of Dr. Ahmed's book will go to millions in the madrasah system in India, Pakistan, Bangladesh, and Afghanistan," said Woldt.

"This is an example of dialogue making a difference."

Ahmed, an internationally renowned figure, is preparing to sum up analysis and lessons from the trip in a new book, "Journey into Islam", to be published next June.

"It's vital for Americans to understand the nuances and complexities of Muslim society in order to formulate a foreign policy that is effective."
Last Mod: 20 Nisan 2007, 14:02
Add Comment