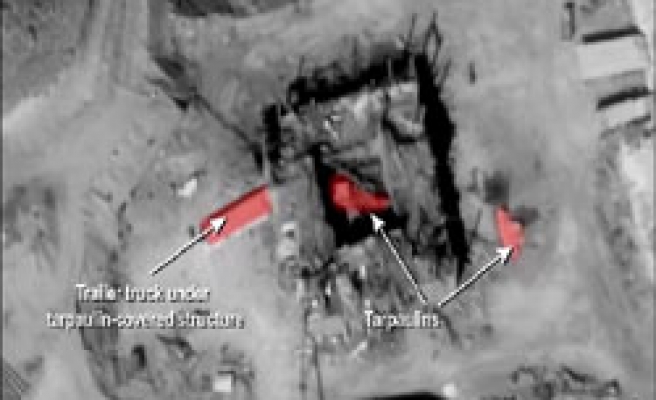 Professor William Beeman at the University of Minnesota passed along a note today from "a colleague with a U.S. security clearance" about the mysterious Syrian site targeted in a Sept. 6 Israeli airstrike, the report said.

The note raises more questions about the evidence shown last week by U.S. intelligence officials to lawmakers in the House and Senate, according to the report.

The author of the note pinpoints irregularities about the photographs. Beeman's source alleges that the CIA "enhanced" some of the images. For example he cites this image:

The lower part of the building, the annex, and the windows pointing south appear much sharper than the rest of the photo, suggesting that they were digitally improved.

The author points to more questions about the photographs of the Syrian site.

Satellite photos of the alleged reactor building show no air defenses or anti-aircraft batteries such as the ones found around the Natanz nuclear site in central Iran.

The satellite images do not show any military checkpoints on roads near the building.

Where are the power lines? The photos show neither electricity lines or substations.

Now compare this photograph of the site:

The site looks like a rectangle in the first shot, but more like a square in the second shot. Huh?, asks the report.