US tells Jimmy Carter not to meet Hamas

The US state department has urged Jimmy Carter, the former president, not to violate foreign policy by meeting Hamas's political leader during a tour of the Middle East next week. 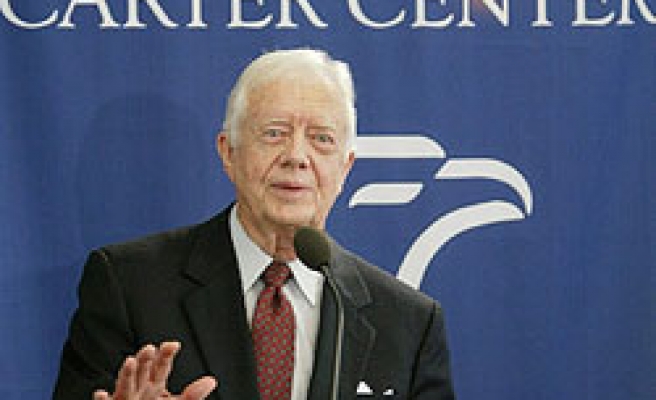 The US State Department said Thursday it has "advised" former US president Jimmy Carter against meeting with the Palestinian group Hamas's exiled leader Khaled Meshaal if he visits Syria.

The State Department advised Carter in late March not to meet any officials from Hamas during a Middle East tour, spokesman Sean McCormack told reporters.

He also confirmed that The Elders, a group of elder statesmen that includes Carter and former UN chief Kofi Annan, had postponed plans for a similar tour after US Secretary of State Condoleezza Rice discussed the trip with Annan.

The group posted its decision on its website on Tuesday, the same day McCormack said Rice spoke to Annan. The conversation focused mainly on the political crisis in Kenya where Annan has been mediating, he said.

The State Department will help Carter with arrangements if he visits Syria but "will not participate in the planning or scheduling of any meetings with Hamas figures in Damascus," McCormack said.

"And in fact we have counseled the former president (against) having such a meeting," he said.

The United States is supporting the Fatah faction headed by Palestinian president Mahmud Abbas in new peace talks with Israel while backing the Jewish state's bid to isolate the Islamist Hamas movement.

Carter plans to travel next week to Syria and the region to help the Middle East peace process, but spokeswoman Deanna Congileo said she could not "confirm or deny speculation of any specific meetings that might take place."

News reports say Carter, architect of the 1979 Egypt-Israeli peace treaty and winner of the Nobel Peace Prize, plans to meet Meshaal, who lives in Damascus.

"Carter will lead a study mission to Israel, the West Bank, Egypt, Syria, Saudi Arabia, and Jordan April 13-21, 2008 as part of the Carter Center's ongoing effort to support peace, democracy, and human rights in the region," the center said.

The Elders said they had planned a visit Israel, the Palestinian territories, Egypt, Jordan, Syria, and Saudi Arabia in April to listen to "representatives from government, civil society, business and the public."

"The Elders will continue consultations with key leaders in the region and outside with the purpose of developing a comprehensive report, but have decided to postpone their visit," they said on their website.

McCormack said David Welch, assistant secretary of state for Near Eastern Affairs, advised Carter not to meet Hamas in a 30-minute telephone conversation at the end of March while Welch and Rice were in the Middle East.