A car buried in Oklahoma in 1957 as a time capsule to mark the US state's 50th anniversary has caused some dismay after being finally unearthed. 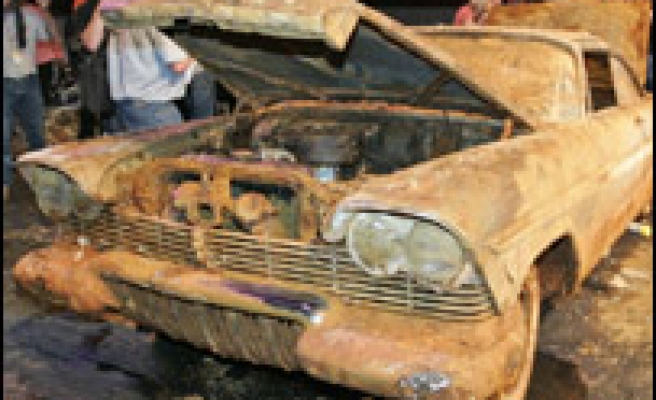 Though encased in a concrete vault said to be strong enough to withstand nuclear attack, the Plymouth Belvedere was waterlogged and covered in rust.

Air was pumped into the tyres but mechanics could not get it started.

The car was exhumed from its vault near Tulsa's courthouse as part of Oklahoma's centenary celebrations.

"I'll tell you what, she's a mess - look at her," said legendary US car builder Boyd Coddington, who had been hoping to start the car at an event attended by thousands of people.

Items pulled from the car's trunk include a petrol can and some cans of Schlitz beer.

But what was supposed to be the typical woman's handbag of the times, containing lipstick and tranquillisers, was said to resemble a lump of rotten leather, the Associated Press news agency reports.

The car is being searched for a microfilm containing the names of entrants in a contest.

They had been asked to guess the population of Tulsa in 2007 and the entrant with the closest estimate, or their heirs, would win the car.