US to deport Palestinian imam over Israel / VIDEO

Imam Mohammad Qatanani, head of the Islamic Center of Passaic County, faces deportation because of an Israeli military court ruling. 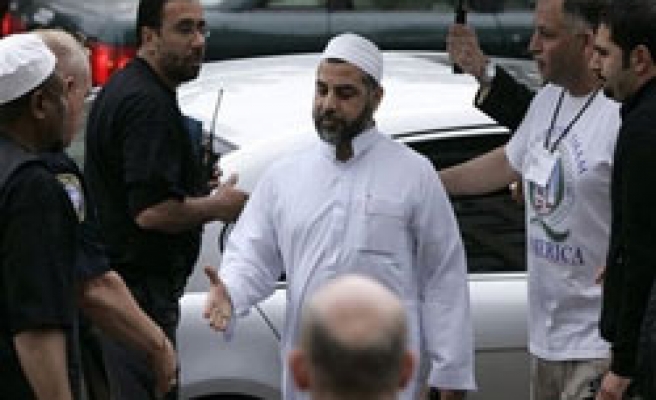 Lawyers for a popular Muslim cleric fighting deportation attacked the testimony of a former Israeli military court judge Thursday in the opening of what is expected to be a three-day trial.

Imam Mohammad Qatanani, head of the Islamic Center of Passaic County, faces deportation for failing to disclose a 1993 conviction in an Israeli military court on his 1999 U.S. citizenship application.

Qatanani says he was convicted without his knowledge after three months of detention that included physical and mental abuse. He has said he did not become aware of the conviction until last fall.

Testifying for the government on Thursday, University of Utah law professor Amos Guiora, a judge and prosecutor in Israel's military courts in the 1980s and 90s, read from documents produced by the Israeli government that said Qatanani "pleaded guilty to being a member of the Hamas organization and providing services for the group".

Guiora, who did not have any direct involvement in Qatanani's case, testified that Qatanani likely attended the court proceeding in which his guilty plea was accepted because the surviving document did not specify that he was not there.

That contention was disputed by Claudia Slovinsky, an attorney representing Qatanani, who said there was no mention of Qatanani on the document. Judge Alberto J. Riefkohl also noted that the names of all others present at the hearing were listed.

Qatanani's alleged confession was referred to in documents recited on the witness stand by Guiora, though the actual confession has not been produced.

Guiora admitted being aware of interrogation techniques used in Israel in the 1990s that included hooding, sleep deprivation, subjection to loud music and being shackled in uncomfortable positions for hours at a time.

Several hundred supporters greeted Qatanani when he arrived at the Peter W. Rodino Federal Building on Thursday morning accompanied by his wife, Sumaia, and their six children.

The crowd stood behind police barricades on the west side of Broad Street, chanting and holding American flags and posters that read "Keep The Imam In America."

Qatanani has been in the U.S. since 1996 and has been praised by political and law enforcement officials for his efforts to reach across religious and cultural divides after the Sept. 11 attacks.

Qatani must stay. He is one of the best imams ever born. He was the best thing that ever happened to mosques in New jersey. i totally disagree and beleive he should stay. he never pleaded gulity accorninf to that racist jew lady