Almost one in ten US combat troops deployed in Iraq have mistreated a civilian, according to a new survey conducted by an army mental health advisory team. 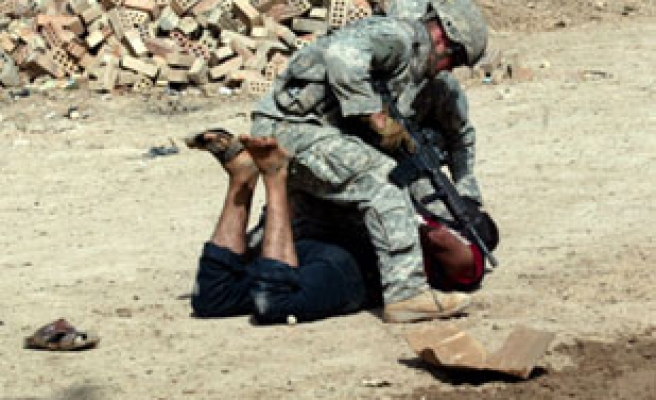 Almost one in ten US combat troops deployed in Iraq have mistreated a civilian, according to a new survey conducted by an army mental health advisory team.

The report, released on Friday, also found that less than half of the soldiers and marines surveyed would report a fellow serviceman for killing or injuring an innocent Iraqi.

"Soldiers with high levels of anger, who had experienced high levels of combat or who screened positive for mental health symptoms were nearly twice as likely to mistreat noncombatants," Major General Gale Pollock, the acting army surgeon general, told reporters at a press conference.

The most common mistreatment reported by soldiers and marines was that of insulting non-combatants in their presence, the report said.

The survey showed that 55 per cent of US army soldiers, and only 40 per cent of marines, would report a fellow serviceman for killing or injuring an innocent non-combatant.

The survey, which shows increasing rates of mental health problems for troops on extended or multiple deployments in Iraq, was the first to include questions on ethics and ethical training.

As such, the report stresses the findings cannot be compared "with any other group of military personnel".

"These men and women have been seeing their friends injured and I think that having that thought is normal," said Pollock, but she added: "They're not acting on those thoughts. They're not torturing the people."

The survey showed only 47 per cent of soldiers and 38 per cent of marines agreed that non-combatants should be treated with dignity and respect.

US operations in Iraq have been dogged by claims of mistreatment of Iraqi detainees and civilians, including revelations of abuse at Abu Ghraib prison in 2004 and reports of the killing of 24 Iraqi civilians by Marines in Haditha in November 19, 2005.

The main aim of the report was to assess the mental health of soldiers and marines involved in operations in Iraq.

The report showed the rate of anxiety, depression and acute stress stood at 22 per cent among soldiers deployed in Iraq for more than six months.

It also recorded an average of 16.1 suicides per year per 100,000 soldiers for those involved in Operation Iraqi Freedom.

Overall, about 20 per cent of army soldiers and 15 per cent of marines showed mental health symptoms of either anxiety, depression or acute stress.

Among army soldiers, 27 per cent of those with more than one tour of duty tested positive for a mental health problem, versus 17 per cent for soldiers on their first deployment.

Morale among soldiers was worse than among marines, which it said was explained in part by the marines' shorter six month tours.

The report recommended that the army's year-long tours in Iraq either be shortened or soldiers be given 18 to 36 months between deployment to recover.

But instead, the army is moving in the opposite direction, with Robert Gates, the US defence secretary, announcing extended tours for US soldiers in Iraq and Afghanistan of up to 15 months instead of one year.

The army is struggling to allow units a year at home between deployments.