The leaders of Venezuela and Brazil are considering the idea of creating a Latin American version of the North Atlantic Treaty Organization, following Colombia's killing of a rebel in Ecuador that rattled the continent this month. 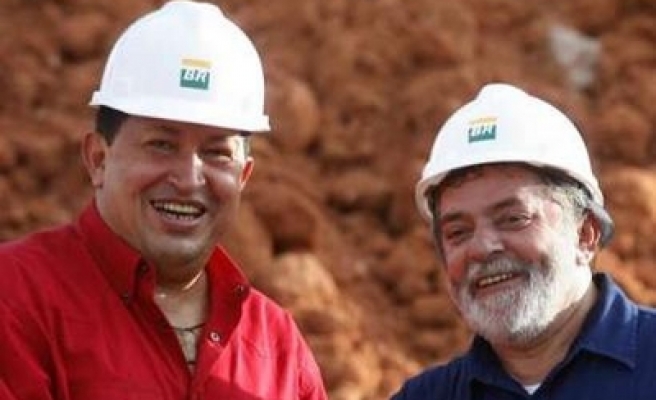 Venezuelan President Hugo Chavez heads to Brazil this week to discuss the potential for creating an integrated defense council for the region, a project envisioned by his Brazilian counterpart Luiz Inacio Lula da Silva.

The idea of creating a "South American Security Council" was proposed by Brasilia after a diplomatic crisis broke out earlier this month following a raid by Colombian forces into Ecuador.

Experts say Lula's idea is to create a specific alliance within which security and defense matters can be discussed between South American nations, similar to the 26-nation NATO.

NATO was formed in 1949, with the commitment of North American and European signatories to "safeguard the freedom and security of its member countries by political and military means," the group says on its Web site.

Bogota's March 1 cross-border military operation on the rebel camp killed a high-ranking guerrilla in the Revolutionary Armed Forces of Colombia (FARC) and several other people, including one Ecuadorian man.

The incident sparked a diplomatic crisis that threatened to engulf much of Latin America and temporarily led to a rupture in relations between Colombia and its neighbors Ecuador and Venezuela.

Both Ecuador and Venezuela mobilized their armed forces for a possible military strike, sending troops to Colombia's border as Chavez underlined his support for Ecuadorian President Rafael Correa.

After a week of high tensions, diplomatic maneuvering through the Organization of American States (OAS) and the Rio Group meeting helped the three countries reconcile.

However, Ecuador, which has yet to resume diplomatic relations with Bogota, said Monday it would report Bogota to the OAS for the death of the Ecuadorian, whom Colombia alleges was a FARC rebel, during the attack.

Chavez thrust himself into the mix again on Tuesday by telling reporters he had invited his counterparts from Colombia, Ecuador and Nicaragua to a closed- door meeting aimed at resolving the crisis once and for all.

Chavez said Colombian President Alvaro Uribe and Daniel Ortega of Nicaragua agreed, and that Ecuador's Correa "could come as well, and the four of us will close ourselves off, without mediators."

Brazil is the third-largest trading partner to Venezuela, after the U.S. and Colombia, with a total of $4 billion traded in 2007.

Chavez and Lula will this week visit the site of a future joint oil refinery in Pernambuco, on which work began in 2005. The refinery, run 60% by Brazilian oil giant Petrobas and 40% by its Venezuelan equivalent PDVSA, will be able to produce around 200,000 barrels a day.

Chavez will also try to convince the Brazilian senate to ratify Venezuela's entry in Mercosur, a regional free trade group.

Last year, Chavez angered Brazilian lawmakers by demanding they ratify his country's entry in Mercosur by September 2007, a call that the Brazilian senate rejected.