Venezuela launched a Zeppelin on Thursday to patrol Caracas, seeking to fight crime in one of Latin America's most dangerous cities but also raising fears that President Hugo Chavez could be turning into Big Brother. 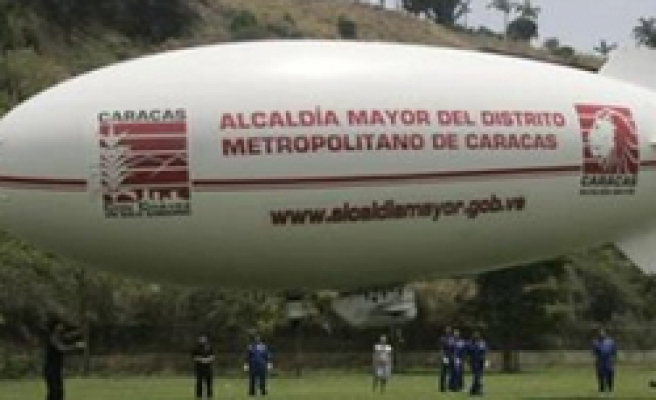 Around the hot-dog stalls of the run-down suburb where the airship took its first flight, most people felt the unmanned eye-in-the-sky could help counter routine hold-ups, shootings and carjackings.

"It is a necessity," said street vendor Pedro Marin when asked about the 15-meter helium-filled blimp that had been looming silently over his stall beside a busy highway.

The $465,000 Zeppelin, built by South Korean firm HanGIS, is the first of three such craft that will beam images into a command center. Police will be able to control the blimps remotely, steering them over the city of about 5 million.

In the refined cafes of east Caracas, there was more cynicism, condemning the blimps as a waste of money that would not work in bad weather or at night, when Caracas is at its most risky, resembling a shuttered-up ghost town.

"It reminds me of 1984, of George Orwell. This is Big Brother. It is not going to solve crime," said Jose Luis, a lawyer who declined to give his family name.

Blimps also fired debates about infringing civil liberties when used in New York and at the 2004 Athens Olympics.

There has been a strong sense of the state keeping tabs on the opposition in Venezuela since a 2004 recall referendum against Chavez, which the president won easily.

Those who signed a petition seeking the referendum complain their identities were made public, affecting their chances of employment in the state sector.

Venezuela's opposition accuses Chavez, hugely popular among the poor majority, of damaging democracy by politicizing state institutions and centralizing power around himself.

The anti-U.S. leader is forming a single governing party, nationalizing huge swathes of the economy and refusing to renew the license of an opposition television channel.

Despite such accusations of growing state control, Ramon Morales Rossi, security chief at the mayor's office, told reporters at the launch there were no grounds for fears the Zeppelin was up to anything sinister.

"If you are just walking in the street, no worries. The intention is to try to lessen crime which is very serious. It is a huge, important issue and the government recognizes it as such," he said.

Venezuela has the world's highest death rate from guns, according to the United Nations, with 34 deaths in every 100,000 caused by firearms. Brazil is second with 22 in every 100,000. Caracas itself has stopped issuing the statistics.

Crime affects all strata of society, from shantytowns where the majority of killings take place to exclusive neighborhoods where villas are ringed by razor wire and electric fences.

When asked about the running joke in Caracas that hardened criminals will simply shoot down any Zeppelin keeping an eye on them, Morales Rossi said the craft was compartmentalized to account for the loss of gas owing to a puncture.