In March, hostility erupted when Colombia bombed inside Venezuelan ally Ecuador to kill a rebel leader, prompting Chavez to send tanks to the border and call Uribe a "liar," while Uribe said his neighbor backed genocide. 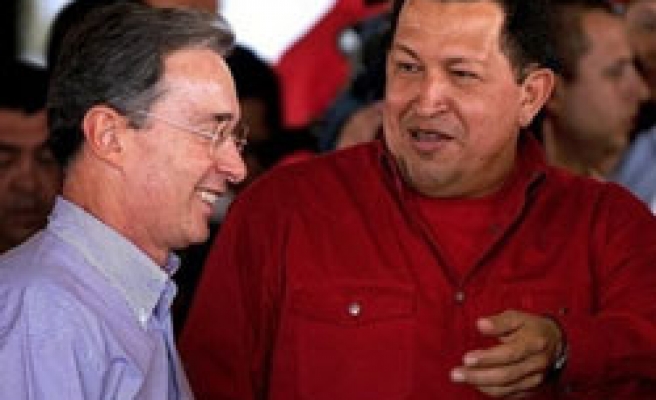 Venezuelan President Hugo Chavez and Colombian President Alvaro Uribe said they repaired ties at a summit on Friday that showcased their renewed personal cooperation after months of bickering.

For much of the year, the socialist Chavez and his pro-U.S. conservative counterpart have exchanged charges that each destabilized their nations, but on Friday they shared handshakes and pledges to boost $6 billion in annual trade.

"We decided to completely turn the page. The storm has passed," Chavez told reporters after hosting a two-hour, one-on-one meeting with Uribe where they aired their grievances but also planned joint rail and natural gas projects.

"We will relaunch our ties, starting on a personal level and then moving on to political, social and economic relations."

Uribe added, "When the human touch prevails ... it is easy enough to put problems behind you."

The Chavez wore his signature revolutionary red shirt. The short, bespectacled Uribe a blue one.

In March, hostility erupted when Colombia bombed inside Venezuelan ally Ecuador to kill a rebel leader, prompting Chavez to send tanks to the border and call Uribe a "liar," while Uribe said his neighbor backed genocide.

But Uribe, who has record approval ratings at home after last week's rescue of high-profile rebel-held hostages, used Friday's session as part of a drive for regional healing after the raid into Ecuador.

Chavez, too, helped polish his image with the summit as he distances himself from Colombian Marxist rebels, following his public support for the Revolutionary Armed Forces of Colombia earlier in the year, which was generally unpopular at home and abroad.

On Friday, Chavez said he had been "very hurt personally" last year when Uribe abruptly ended his role as mediator with Colombian rebels. His visitor responded by apologizing publicly for not even calling Chavez to explain his decision.

They also laughed about how Uribe does a convincing impersonation of the bombastic Chavez. They recounted how the Colombian mimicked the moment when his counterpart gave him a painting of Simon Bolivar -- the 18th-century Venezuelan leader who ejected Spain from Latin America -- brandishing a sword.

"Your sword is always drawn," Chavez joked to Uribe.