Venezuelan police fired tear gas and plastic bullets Monday into a crowd of thousands protesting a decision by President Hugo Chavez that forced a television station critical of his government off the air. 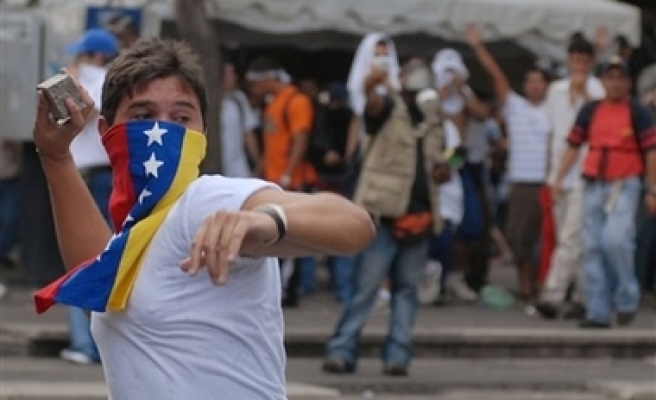 Venezuelan police fired tear gas and plastic bullets Monday into a crowd of thousands protesting a decision by President Hugo Chavez that forced a television station critical of his government off the air.

Police fired toward the crowd of up to 5,000 protesters from a raised highway, and protesters fled amid clouds of tear gas. They later regrouped in Caracas' Plaza Brion chanting "freedom!" Some tossed rocks and bottles at police, prompting authorities to scatter demonstrators by firing more gas.

It was the largest of several protests that broke out across Caracas hours after Radio Caracas Television ceased broadcasting at midnight Sunday and was replaced with a new state-funded channel. Chavez had refused to renew RCTV's broadcast license, accusing it of "subversive" activities and of backing a 2002 coup against him.

Interior Minister Pedro Carreno told state-run television that four students were wounded by gunfire during a pro-RCTV protest staged near a university in the city of Valencia, located 150 kilometers (93 miles) west of Caracas. It was not immediately clear who the assailants were or if they were arrested.

At least three protesters and one police officer were injured in the Caracas skirmishes. Some protesters were seen in television footage hurling spent tear gas canisters back at police.

Office workers poured out of buildings to join student protesters, while organizers called for the demonstration to remain peaceful. RCTV talk show host Miguel Angel Rodriguez led the crowd in chants of, "They will not silence us!"

Separately, Information Minister Willian Lara accused the private Globovision TV channel of encouraging an attempt on Chavez's life by broadcasting the chorus of a salsa tune — "Have faith, this doesn't end here" — along with footage of the 1981 assassination attempt against Pope John Paul II in St. Peter's Square.

"They incite the assassination of Venezuela's president," he said.

Thousands of government supporters reveled in the streets as they watched the midnight changeover on large TV screens, seeing RCTV's signal go black and then be replaced by a TVES logo. Others launched fireworks and danced in the streets.

Inside the studios of RCTV — the sole opposition-aligned TV station with nationwide reach — disheartened actors and comedians wept and embraced in the final minutes on the air.

Chavez says he is democratizing the airwaves by turning the network's signal over to public use.

The president accused the network of helping to incite a failed coup in 2002, violating broadcast laws and "poisoning" Venezuelans with programming that promoted capitalism. RCTV's managers deny wrongdoing.

Some protesters on Monday blocked roads with rocks and burning trash, saying they fear for the future of free speech. Police used tear gas to break up at least two protests, and were seen handcuffing and detaining one man.

The group Reporters Without Borders called for international condemnation of the RCTV decision as "a major setback to democracy and pluralism."

Germany, which holds the European Union presidency, officially declared its concern that Venezuela let RCTV's license expire "without holding an open competition for the successor license."