Tens of thousands of people have marched in Caracas, the Venezuelan capital, to protest against government plans to take Radio Caracas de Television (RCTV), a network critical of Hugo Chavez, the president, off-air. 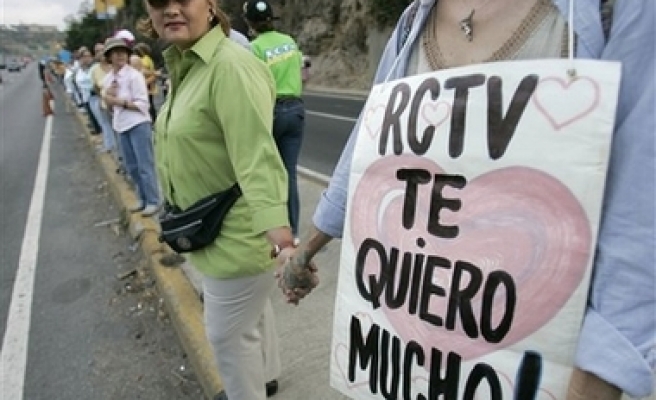 Tens of thousands of people have marched in Caracas, the Venezuelan capital, to protest against government plans to take Radio Caracas de Television (RCTV), a network critical of Hugo Chavez, the president, off-air.

Protesters bearing banners voicing support for the channel began marching in four parts of the city on Saturday before converging.

RCTV is due to go off air at midnight on May 27 when its license expires.

The channel and its supporters argue Chavez is trying to silence criticism by not renewing its license, while the government says it will be replaced by a public-service station and denies freedom of speech is threatened.

One protester who traveled 240km to attend the protest said: "If [Chavez] shuts down the channel, he's crazy … I don't think it's fair. He has to ask the people whether they want it or not."

The march was organised by the channel and 26 opposition political parties.

In a speech to protesters, Marcel Granier, RCTV's chief urged the Venezuelan to change his decision: "He who rules must listen; the people are speaking."

Founded in 1953, RCTV is Venezuela's oldest private network and broadcasts a mix of news, talk shows, sports and soap operas.

Eladio Lares, host of RCTV's version of the popular game show, Who Wants To Be a Millionaire? said: "RCTV is a stronghold of liberties, of democracy, of telling the truth."

Chavez has accused RCTV and other opposition-aligned private media of supporting a failed 2002 coup against him by broadcasting cartoons and movies instead of covering street protests that aided his return to power.

Government supporters also accuse RCTV of biased coverage that has glossed over improvements in medical care, education and other social programs introduced by the Chavez administration.

Granier has said RCTV has the right to keep broadcasting until 2022 and challenged the government's decision in court.

Venezuela's Supreme Court dismissed the first of a series of legal challenges by RCTV on Thursday to remain on the air but left open the possibility for the channel to seek redress through other legal means.

But on Friday, Chavez ruled out any possibility that RCTV would continue broadcasting.

"Gentlemen of the Venezuelan oligarchy, the only way that the license does not end on Sunday 27 at midnight is if Hugo Chavez is not president," he said, defying the Supreme Court's assertion that the country's telecommunications watchdog has the ultimate authority over broadcast licenses.

Chavez's government has been criticised for its decision by press freedom groups, Amnesty International, the secretary-general of the Organization of American States and the Roman Catholic Church.