Kidnapped British reporter Alan Johnston appeared in a video posted on an Web site on Friday, saying he has been treated well, and calling for the lifting of international sanctions against the Palestinian government. 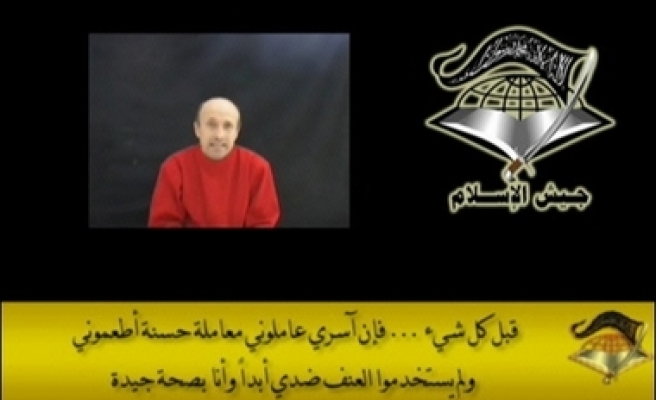 Kidnapped British reporter Alan Johnston appeared in a video posted on an Web site on Friday, saying he has been treated well, and calling for the lifting of international sanctions against the Palestinian government.

There was no way to tell when the video was recorded.

Johnston, a correspondent for the British Broadcasting Corp., was kidnapped March 12 by Palestinian gunmen in Gaza City, and before Friday, hadn't been seen or heard from since.

The tape appeared on the Al-Ekhlaas Web site, frequently. It bore the logo of the Army of Islam, the Palestinian group that had been believed to be holding the 45-year-old reporter.

Johnston, looking fit and calm, spoke of the suffering Gazans have endured and urged an end to sanctions imposed more than a year ago.

He was shown from the waist up, wearing what looked like a red sweatshirt, and appearing to be seated.

Britain's Foreign Office said it was aware of media reports and investigating the claims. "We are urgently investigating these reports," said a spokesman, speaking on customary condition of anonymity.

The BBC said it was also investigating the reports, but had not yet obtained a copy of the video.

"We are aware of the reports and we are investigating urgently," said Simon Wilson, the BBC bureau chief in Jerusalem.

The company planned to issue a statement later Friday, a BBC spokesman in London said.

Last week, an aide to Palestinian Prime Minister Ismail Haniyeh said Johnston was alive and well, and could soon be released.

He has been missing far longer than any foreigner kidnapped in Gaza, and his disappearance has touched off numerous protests and solidarity marches in London and the Palestinian territories.

The Army of Islam released a 20-minute recording recently, showing a picture of Johnston's press card and demanding the release of a man held in a British jail.

The British government has said it would not make any deals to secure the journalist's release.

Palestinian officials have said they knew where to find Johnston, but have held back on raiding the hideout at Britain's request, for fear of harming him.

The Palestinian government has instead tried to negotiate with the captors.