About 20 percent of Vietnam's people live in the Cuu Long River Delta, the Vietnamese name for the Mekong river, which produces more than half of the country's paddy output but supplies more than 90 percent of its commercial rice. 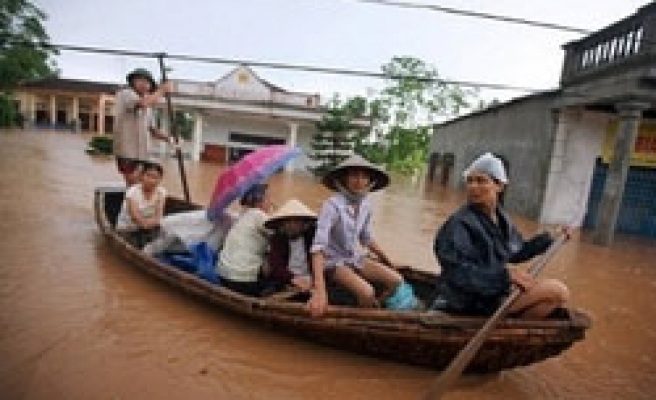 Rising Mekong floods upstream may cause landslides and deep inundation in southern Vietnam but the seasonal floodwater would also bring farmers good crops of rice and fish, the government and officials said on Tuesday.

The government said rescue forces must be ready to move people from dangerous areas in southern Vietnam, where the Mekong river reaches the South China Sea after travelling more than 4,000 km (2,500 miles) from Tibet through Laos and Cambodia.

Four people have been killed in flooding and landslides in Laos, where the Mekong river has hit its highest level in at least 100 years after several months of unusually heavy rain (For a related story, please double click on [IDnSP192460]).

"Floods in the Cuu Long River Delta happen every year, so people are used to taking preventive measures for crops and life," Le Van Banh, director of the Mekong Delta-based Rice Institute, told Reuters by telephone from Can Tho city.

"In the past floods caused problem to transportation and it was hard for children to come to school, but in recent years Vietnam has built protective dykes and residential areas above the flood-peaking level," he said.

About 20 percent of Vietnam's 86.5 million people live in the Cuu Long River Delta, the Vietnamese name for the Mekong river, which produces more than half of the country's paddy output but supplies more than 90 percent of its commercial rice.

Rice growers say they will get extra income from fishing when flooding is high and after they end the summer rice harvest. Flood waters also clean up alum, pests and rats from fields while bringing more fertile soil.

"Since the floods are to wash away alum, we expect the yield of the next winter-spring rice crop to be good, at least on par with this year," Banh said.

The winter-spring crop, the Delta's top yielding, produced 10 million tonnes of paddy in April with a yield of 6.2 tonnes per hectare, prompting the government to raise Vietnam's annual rice exports by 13 percent from earlier targets [nSP283104].

Seasonal floods appeared slowly in the Delta in July, a month earlier than usual. But this week flood waters are rising faster from heavy rains upstream two weeks ago, including the downpours that caused flash floods in northern Vietnam.

"Floods are forecast to rise above the average level in many years," said meteorologist Vo Thanh, head of the weather station in An Giang, one of the Mekong Delta's main rice growing provinces.

Waters are expected to rise to 3.5 metres (12 feet) above sea level at Tan Chau gauging station on Friday, or 0.1 metre below the Alarm Level Two, which indicates inundation and danger of river bank and dyke erosion but towns are still protected.

In 2000, the Delta experienced the worst floods in four decades as waters rose to more than 5 metres, killing nearly 500 people, more than 300 of them children.

Since then the government has launched a campaign to protect life and property, having built 82,000 new homes, relocated 110,000 families or 80 percent of those living in dangerous areas, and opened swimming class for children and teachers.

However, about 30,000 families living near rivers are still facing risk of landslides, according to provincial figures.