In extraordinarily strong language, a high-level investigative panel sharply criticized Israeli Prime Minister Ehud Olmert for "severe failure" in his handling of the war in Lebanon — a potentially fatal blow to his political survival. 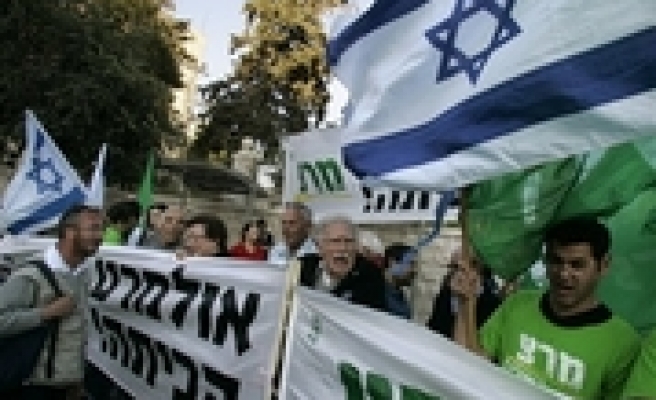 Whether Olmert can hang on to his job will depend on how the Israeli people respond to the panel's report, which blamed him for "hastily" rushing into a war the army was not prepared to wage — and that many Israelis think emboldened the Jewish state's enemies.

An expressionless Olmert stared straight ahead and slumped against the back of his chair as the panel's chairman read the report, which cited "a severe failure in the lack of judgment, responsibility and caution."

However, Olmert vowed to remain in office despite calls for his resignation from coalition partners as well as opponents. He also promised that failures "will be remedied."

"It would not be correct to resign," he said in a brief televised statement from his office, "and I have no intention of resigning." Instead, he said he would convene a special session of his Cabinet on Wednesday to begin implementing the report.

While Olmert's fate was uncertain, Eitan Cabel of the Labor party, a minister without portfolio, said through a spokesman Tuesday that he was resigning to protest the critical findings. Cabel was the first member of the government to step down following the report.

Olmert's best hope for remaining in office appeared to rest in his coalition partners' fear of new elections, which polls predict would bring opposition leader Benjamin Netanyahu of the hard-line Likud Party to power. Olmert's centrist Kadima Party might seek to replace him, which would put the popular foreign minister, Tzipi Livni, in a good position to become Israel's second female prime minister.

The report capped a six-month investigation into the war, which erupted July 12 when Hezbollah guerrillas killed three soldiers and captured two others in a cross-border raid. In 34 days of fighting, Israel failed to secure the return of the captured soldiers or to prevent Hezbollah from firing thousands of rockets into Israel.

Soldiers returning from the battle front complained of poor preparations, conflicting orders and shortages of food and supplies.

Between 1,035 and 1,191 Lebanese civilians and combatants were killed in the fighting, as were 119 Israeli soldiers and 39 civilians, according to official figures from the two sides.

Olmert has repeatedly called the war a success, citing the closing truce arrangement that forced Hezbollah away from the Israeli border and brought in thousands of international peacekeepers to monitor the area. But few Israelis share that view, and a poll commissioned by Israel Radio shortly after the report was issued showed 69 percent of those questioned thought Olmert should quit.

"There's no question" Olmert must go, said Zeev Crombie, a 50-year-old resident of the ancient city of Safed, the target of many Hezbollah rockets during the war. "In the eyes of the Arabs, we were defeated. And that gives them a lot of courage to continue to try to wipe us out."

A key test of Olmert's ability to weather the crisis will come on Thursday, when his opponents from both the left and right are planning a mass protest in Tel Aviv.

The report analyzed the first six days of the war, as well as the six years preceding the war beginning with Israel's 2000 pullout from southern Lebanon and Hezbollah's subsequent buildup along the border. The committee noted that part of the blame for the shortcomings during this war also fell on previous Israeli leaders. A full report on the entire war is scheduled for release this summer.

In a scathing conclusion, the commission laid ultimate responsibility on Olmert's shoulders.

"The prime minister bears supreme and comprehensive responsibility for the decisions of his government and the operations of the army," the report said.

"The prime minister made up his mind hastily, despite the fact that no detailed military plan was submitted to him and without asking for one. Also, his decision was made without close study of the complex features of the Lebanon front and of the military, political and diplomatic options available to Israel," it said.

"If any one of them had acted better ... the outcome of the campaign would have been different and better," said Eliyahu Winograd, the retired judge who led the investigation.

The report did not call for the resignation of any of Israel's wartime leaders, but left none unscathed.

The committee also came down hard on the Cabinet for relying too heavily on the army's recommendations and not pressing for an alternative course of action. "The ministers voted for a vague decision, without understanding and knowing its nature and implications," Winograd said.

After receiving the report Monday, Olmert pledged to "act immediately to learn everything necessary in order to learn the lessons, to correct failures and ensure that in every possible future threat facing the state of Israel the failures and the defects that you point to will be remedied."

Olmert scheduled a meeting with his Kadima Party Monday evening to discuss the report.

In Lebanon, Hezbollah welcomed news of the critical findings.

In Washington, White House press secretary Tony Snow said the U.S. did not wish to comment on "internal investigations within the Israeli government" but noted that President Bush works closely with Olmert and thinks he is "essential" to achieving Mideast peace.

Even if Olmert remains in office, however, his weak stature will likely limit his ability to push forward peace efforts with the Palestinians.

"We hope that this report and the findings of this report will not further complicate and hinder attempts to revive the peace process," said Palestinian negotiator Saeb Erekat.