Warm words but no agreement in Putin-Bush talks

US Bush and Russian Putin ended their meeting on Sunday with warm words for each other but no solution to their row over missile defence. 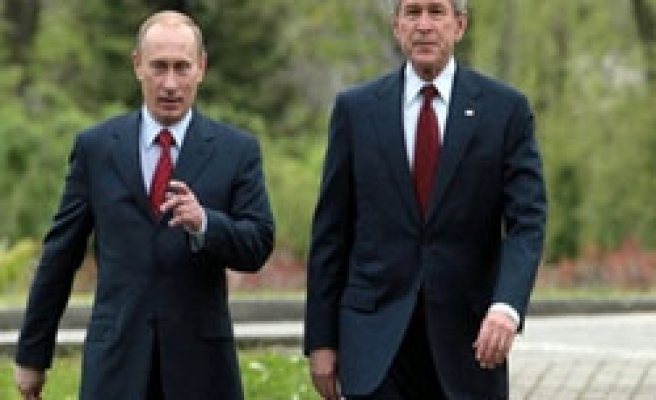 U.S. President George W. Bush and Russia's Vladimir Putin ended their last face-to-face meeting as heads of state on Sunday with warm words for each other but no solution to their row over missile defence.

With Putin to step down next month and Bush in the twilight of his presidency, both leaders stressed the strong personal rapport which they say has helped keep relations between their countries on an even keel.

But differences over U.S. plans for a missile defence shield in eastern Europe, which have helped drive diplomatic ties to a post-Cold War low, meant their summit on the Black Sea coast ended with no firm agreements.

"This is an area we've got more work to do to convince the Russian side that the system is not aimed at Russia," Bush said after a morning of talks with Putin at the Russian leader's vacation retreat in the resort of Sochi.

Keen to leave a positive legacy for their successors, the two leaders signed a document setting out a "road map" for future ties after they leave office and said they would keep working to reach a compromise on the shield row.

Washington tried to make substantial progress towards a deal on the shield at the two-day summit in the resort of Sochi but the vaguely-worded declaration fell short of that.

In preparation for when Putin steps down on May 7, Bush also held talks with Dmitry Medvedev, the Russian leader's protege who will take over as president. Bush said afterwards his first impressions were "very positive. A smart fellow".

Seven years ago Bush said he had peered into Bush's soul and found a man he could trust. Since then relations between their two countries have been soured by disputes over Iran, Kosovo, the missile shield and NATO enlargement.

Showing their rapport was nontheless intact, Bush joined Putin on stage to dance with a Russian folk ensemble at an informal dinner on Saturday. They paid warm tributes to each other after their talks.

"I always appreciated his (Bush's) superior human qualities: "honesty", openness and an ability to hear a partner. This is worth a lot," Putin told a joint news conference.

Washington says it wants to station interceptor missiles in Poland and a radar system in the Czech Republic to protect against missile strikes from what it calls "rogue states". Russia says the plan threatens its security.

In their declaration, Putin and Bush said they would "intensify dialogue" to find a compromise. They said that could involve Russia and the United States working together on a joint missile defence system, but there were no details.

"I want to be understood correctly. Strategically, no change happened in our ... attitude to U.S. plans," Putin told reporters at his joint news briefing with Bush.

"At the same time there are some positive developments. Our concerns were finally heard by the U.S. side. I am cautiously optimistic that we will reach an agreement. ... The devil is in the detail."

Putin said NATO's plans to offer eventual membership to ex-Soviet Ukraine and Georgia -- a step strongly backed by Washington -- were "an example of old logic where Russia was viewed as an adversary."

But he did not deploy any of his customary strident criticism of the United States, saying he did not want differences to overshadow their relationship.

In keeping with the upbeat tone, the two leaders committed themselves to continue work on finding a replacement for the START nuclear arms treaty, which expires next year.

Bush said he would ask the U.S. Congress to repeal this year the Jackson-Vanik amendment, a Cold War-era provision tying trade to human rights. It has not hampered vibrant trade links but the Kremlin sees the failure to repeal it as a slight.