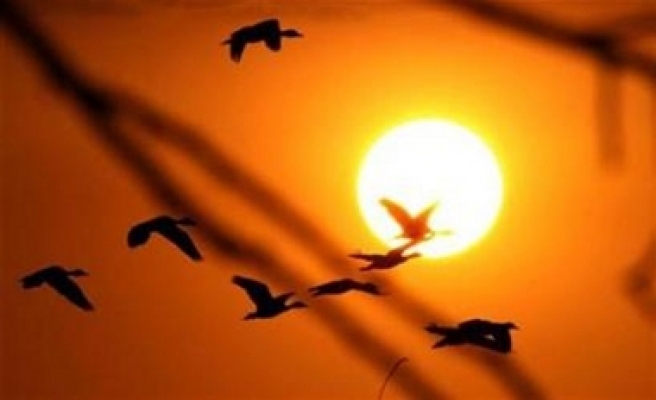 Failure to adapt risks extinction. Birds face starvation when they arrive too early or too late to find their normal diet of insects, plankton or fish. In the north, some birds have stopped migrating altogether, leaving them at risk when the next cold winter strikes.

"Species that adapted to changes over millennia are now being asked to make those adaptations extremely quickly because of the swift rise in temperatures," said Robert Hepworth, executive secretary of the Convention on Migratory Species, a treaty under the auspices of the U.N. Environment Program.

"We don't know how many will survive. We will lose species," he said in an interview Saturday on the sidelines of an international climate change conference in Bonn, Germany.

This weekend, bird watchers and conservationists in dozens of countries marked World Migratory Bird Day with concerts, films and children's drawing contests to attract attention to the rising threat of global warming.

The Intergovernmental Panel on Climate Change — a body of some 2,500 scientists — has warned in a series of reports this year that high emissions of greenhouse gases are likely to raise the Earth's average temperatures by at least 3.6 degrees.

The warming is predicted to drive up to 30 percent of known animal species to extinction, and migrating birds are especially vulnerable.

Climate change can strike at each stage of their annual trek, from breeding ground to rest stops to their final destination.

Studies cited by the convention say arctic permafrost and tundra where many species breed are melting. Even moderate rises in sea levels can swamp wetlands where birds stop to feed. Deserts are expanding, lengthening the distance between rests.

Hepworth recalls watching great V-formations of Bewick's swans arriving in his native Britain from northern Russia for the summer. Fewer are seen now.

The extraordinary travels of the red knot are another example. The medium-sized shore bird breeds in Siberia and migrates to southern Africa, shedding half its body weight under the strain of a flight that reaches survival limits. The expansion of the north Africa deserts could push them over the edge.

The convention's scientific council says 84 percent of the 235 species listed its annexes could be affected by changes in water availability, mismatched foods supplies, more frequent storms and competition with alien species intruding into their habitat.