What do parties' candidate lists tell us? 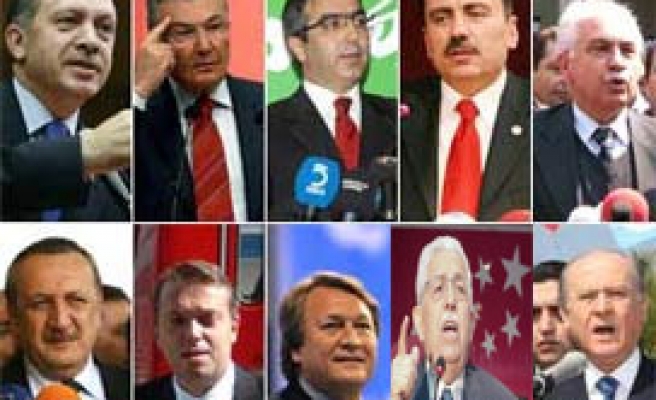 Big election regions turn the relation between the candidate and the voters into a relation maintained through the party organization. The party organization means the leader. While the leader becomes the sole authority in deciding the candidates, he has to exercise his authority to list people that address as big a portion of the country as possible. In the dog-eat-dog candidate competitions within a party, candidate lists influence the results. As done by parties that have classical teams, addressing the voters and giving messages with famous names becomes important.

As we are approaching July 22, the week of June 4 witnessed the discussions of parties on which candidates to choose. As is the case in all elections, the parties have renewed their teams a little and changed their “celebrities.” The word “vitrine” covers the term “celebrities” in Turkey. This word considers the existence of celebrities as only a marketing instrument. Since it is reminiscent of functionless statuettes, it has a humiliating connotation. However it ultimately means the leading teams that parties present to the public. This scene, which occurs before every election, at the same time shows politics’ change in direction with the principles and policies represented by these people. In turn the declared names indicate that parties approach one another and there is a pileup toward the centre. The right and left wings approach each other on the margins while the right and left wing that are normally close to the centre approach each other toward the center. However we should still view this scene by paying attention to the authentic meaning of the right and left in Turkey.

Among our political jargon the most lasting couple of terms which we derived from the West are “right” and “left.” This couple, which was invented on the eve of the French Revolution, caught on in Turkey in the midst of the 1960s. The reason why this pair turned out to be a very lasting one is that it shows the position prior to the content. Right and left show us the directions. The usefulness stems from the fact that left cannot be right and right cannot be left at the same time. The contents of right and left may change at the same time, however since their positions are against each other, or more precisely, since they feed each other by constantly being contradictory, the right preserves its position in the right, and the left preserves its position in the left.

The political spectrum in Turkey resembles a horseshoe whose ends, right and left, stand close to each other, rather than being a straight line where the center is in the middle, and right and left are on both ends. The closeness between the new leftist ideology called “neo-nationalism” and the Nationalist Movement Party (MHP) indicates that both ends of the political spectrum are close to each other like the ends of a horseshoe. The MHP having on its lists people favoring a Republican People’s Party (CHP)-type secularism gives us an idea on how the right and left wings are getting close to each other. The “National Forces” standing out in this election process are the symbolic area where the nationalism of the left overlaps with that of the right.

When it comes to the center

Ertuğrul Günay and Haluk Özdalga listed by the Justice and Development Party (AK Party) are bright faces of the left whose identities are not controversial. With his past extending back to MHP by way of the True Path Party (DYP) and Motherland Party (ANAVATAN, then-ANAP), the nomination of İlhan Kesici by the CHP, who left no place on the right untrodden, is commented on as the CHP’s expansion into the right. It is possible to have a clearer idea on what goes on in the background when you take these names as symbols and analyze them by what they represent. The AK Party has formed its identity as a social-conservative-democrat party advancing toward the center. “Social democracy,” is the name of the parliamentary socialism which is not revolutionist. Its defending of egalitarian and poor-friendly policies tells of its “social” identity; its adoption of a stance on the side of the individual against the state’s power tells of its “democrat” identity. Since the CHP doesn’t own any of these attributes today, its position as “social democrat” is seriously at stake and controversial.

The question to be asked is, will Günay and Özdalga be able to defend “social” and “democratic” policies in the AK Party? On the contrary, will Kesici, who in his past defended the liberal market economy, be able to perpetuate his pro-privatization preferences in the CHP? While easily saying “yes” to the former, why are we hesitating on the latter?

These efforts are pulling both the right and the left closer to the center. They are placing the political competition on the central route. And on one hand the distance between the ends of the horseshoe is slowly closing; on the other, the right and left are trying to get close to the center (without an intention to settle.) The vitrines indicate that the struggle between the CHP and the AK Party will continue at the center. The most important result of this current scene that will be reflected on the election climate is that it is making the political competition more moderate and constructive. The politics that tries to get close to the center rather than getting carried away to the extreme ends begins a positive interaction.

The law on political parties forbids them from forming temporary alliances designed to surpass the election barrier. However parties overcome this obstacle and form alliances. The method in vogue is for the weaker party of the alliance as a rule not to nominate anyone, but instead nominate its candidates on the stronger party’s list. This practice clearly shows that the sole purpose of such a merger is to surpass the election barrier and that the parties of the alliance will separate after the elections. The merger between the CHP and the Democratic Left Party (DSP) occurred with the CHP nominating some DSP candidates in the parts of its list where they can be elected. The subject of the negotiations between the DYP and ANAVATAN was not a temporary alliance but a long-term partnership that would continue to exist after the elections. The decision of parties, who fiercely compete with each other under normal circumstances, to merge prompts a tough process. It is normally very difficult to banish the distrust and doubts and for mutual demands to be reconciled with each other in a balanced fashion. The first attempt made by ANAVATAN and the DYP at merging under the roof of the Democrat Party (DP) ended in failure because of this lack of confidence. It was still anticipated that this attempt might once again be made in a narrower context. But this time the repulsiveness of the second attempt in the public sight comes into the play.

The decision to merge is at the same time a sign of weakness. By merging, weaker parties try to get a share from the cake against the bigger parties; a share which they cannot take otherwise due to the election system. And this contradicts the search for stability. Smaller parties merging and eventually making it to Parliament mean nothing but a “patchwork” Parliament. The stability, which the election system tries to secure, is thus broken. So it is tacit that the voters will not view positively these attempts that will debilitate our stability.

It is said that there are actors behind these merger attempts who want to perpetuate the order of military guardianship. The goal is to create a strong anti-AK Party bloc. I call this political power over these parties “the Party of State Institutions.” This power is an invisible hand. However, there is another “invisible hand” against the one endeavoring to create an anti-AK Party coalition. This hand resembles the “invisible hand” that economists acquired from Adam Smith, and which secures the balances of the free market. This hand processes the voter sociology according to the rules. Millions of voters, whose destiny is the only thing they can seem to control, are watching the political developments, drawing conclusions and freely using their votes. We read the results of the preference of millions that come out of the ballot boxes solely as vote ratios. There is fierce arm wrestling going on between the “invisible hand” that works at the table in a dark room and the one that adjusts the ratios that come out of the ballot boxes.

Casting a blight on the election atmosphere, these outside interventions cannot keep election dynamics under control. That’s why the alliance attempts look quite obnoxious, repulsive and repugnant in the public sight. In the same manner, the interventions made from outside also influence parties’ staff. The way it influences them results in such a fashion that it is in clash with the wishes of the interveners. The chief reason for Günay and Özdalga, two bright faces of the left, to join the AK Party is that democracy is under an imminent threat. These democrat left wingers took their places in the AK Party ranks to support democracy rather than the party itself.

The disclosure of the candidate lists was one of the most significant phases of the election marathon. The obvious feature of the candidate lists is that the current political scene has formed and is developing in total clash with the plans of the interveners. This situation signals that the election results will not be the way these clandestine forces want them to be. Last Mod: 10 Haziran 2007, 09:57
Add Comment