Winners at Turkish Olympics are champions of peace

More than 500 students from 100 countries enjoyed a spectacular and lively ceremony to mark the finals of the Fifth International Turkish Olympics. 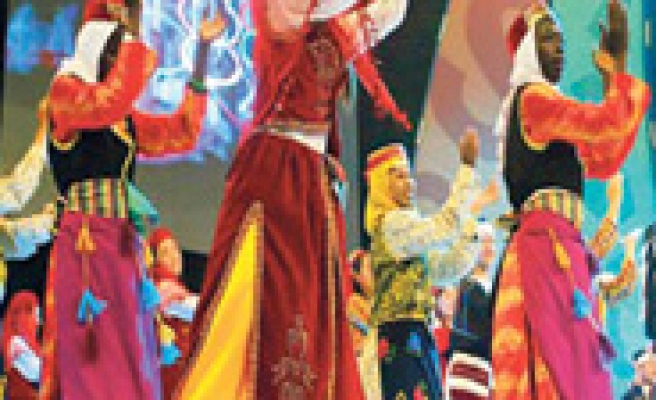 More than 500 students from 100 countries enjoyed a spectacular and lively ceremony on Saturday to mark the finals of the Fifth International Turkish Olympics, an event where international students compete in categories ranging from singing and reciting poems to writing articles in Turkish.

The winners were given their awards in the ceremony at the İstanbul Show and Congress Center. The event stood as an important symbol of world peace, with children singing songs of peace and brotherhood in Turkish. Parliament Speaker Bülent Arınç gave a speech during the finals and called on those looking for peace in the world "to look at the Turkish Olympics." He implicitly criticized US political scientist Samuel Huntington's book "The Clash of Civilizations," and said, "Those who write one book after another asserting there will be a clash, those who devise one scenario after another, should see the love here."The finals of the fifth Turkish Olympics, held at İstanbul’s Show Center on Saturday, made for an outstandingly colorful day, with more than 550 students from 100 countries of the world staging spectacular shows.

Messages of peace were conveyed by the youth of the world all around the hall where the finals were held, while the Choir of Peace sang songs of love, peace and brotherhood. Emotions ran high at certain times among the hundreds gathered in the hall as five finalists, determined by SMS votes from the viewers, competing in the categories of poetry and singing took the stage. The audience, some in tears, gave emotional applause to these champions of the Turkish language.

Adem Tatlı, the general manager of the Turkish schools in Mongolia, who lost his life in a car accident last year, was also commemorated. Elvira Saranayeva, from Ukraine, read the poem “The Horsemen Riding on the Frontline” in honor of Tatlı.

Guests invited to the stage to hand out the winners’ awards expressed their gratitude to the “heroes of Turkish,” -- the teachers who live abroad and teach in Turkish schools around the world.

The champions of Turkish

The day of finals was launched with the students, representing five continents of the world, singing Turkey’s national anthem. Aida Risbekkizi was the winner in the category of poetry, followed by the second place finisher Ajayip Allaşova from Turkmenistan, and İnranek Kalau from Mozambique in third. The winner in the singing category was Havsa Mula from Macedonia with her song “I am mourning.” The runners-up were Pakistan’s Shessyed and Ghana’s Edna Darko.

Congratulations to the champs

The 7,000-seat İstanbul Show and Congress Center was packed with thousands who joined the students’ calls for world peace. Outside, those who couldn’t get into the crowded hall watched the ceremony on giant screens.

The famed Orhun epitaphs, the first written documentation of Turkish history, were displayed on the two sides of the stage. The ceremony started off with a spectacle showing the eternal war between good and evil, where the good came out the victor with the children standing in unity against evil. At the end of the play, the kids turned over blank sheets they held in their hands and revealed the word BARIŞ -- the Turkish word for peace -- spelled out on the other side.

Professor Mehmet Sağlam, the head of the organization committee, expressed hope that Turkish would one day serve as the language of tolerance, negotiation, intercultural cooperation and love. Sağlam also emphasized that the Turkish Olympics were the only international organization bringing 550 people from 100 countries where people could speak and listen to speeches with no translation necessary.

Education Minister Hüseyin Çelik, speaking on behalf of the government and the prime minister, greeted the audience and expressed hope that the organization will expand to include all countries of the world. DP leader Mehmet Ağar’s speech emphasized the beauty of having “children as brilliant as diamonds from all over the world speaking Turkish.” Transportation Minister İsmet Yılmaz in his speech stressed that accepting all nations of the world equally was the core of Turkish culture.

Olympics the cure for world’s problems

Parliament Speaker Bülent Arınç in his speech said the ceremony represented goodwill and peace in the entire world. Arınç said the organization with kids from 100 countries participating had melted “icebergs inside hearts,” adding, “You have managed something that would never been managed with money, politics or weapons.” Arınç said although he has been in politics for three decades, the significance of his services to the country was close to nothing compared to what the teachers of Turkish do.

The Special Atatürk Award was given to honor Saparmurat Türkmenbaşı, the late President of Turkmenistan and Haydar Aliyev, the former President of Azerbaijan who died several years ago. Ambassadors of the respective countries picked up the awards on behalf of their countries. Meanwhile, children from Vietnam, Senegal, Iraq, Kyrgyzstan and Georgia, dressed up in traditional Anatolian costumes danced various Turkish folk dances from different regions of the country.