The ex-husband of a relative of one of the prime suspects in the murder of Turkish-Armenian journalist, attended court proceedings yesterday, but refused to make a deposition as he had no lawyer. 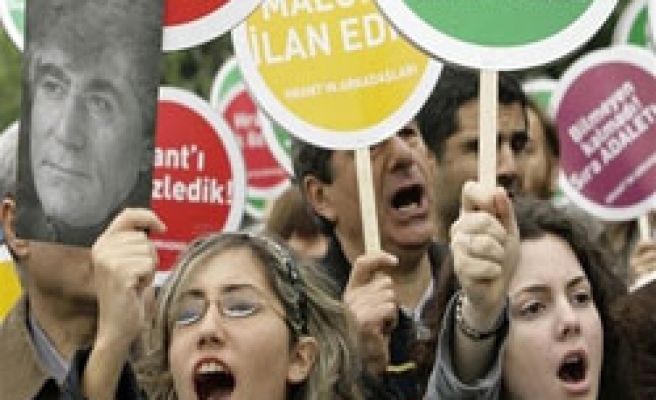 Coşkun İğci, the ex-husband of a relative of one of the prime suspects in the murder of Turkish-Armenian journalist Hrant Dink, attended court proceedings yesterday, but refused to make a deposition as he had no lawyer.

The fifth hearing in the ongoing murder trial for Dink, who was gunned down last year in İstanbul in front of the headquarters of bilingual Armenian weekly Agos where he was editor-in-chief, took place at the İstanbul 14th High Criminal Court yesterday.

İğci is the ex-husband of the aunt of Yasin Hayal, one of the prime suspects in the case. İğci had previously asserted in his testimony that he had informed two soldiers of a plot to assassinate the journalist months before the incident. At yesterday's hearing he did not make a deposition as his lawyer was not present.

Security was tight outside the Beşiktaş courthouse; police put up barriers around the building and set up checkpoints to search individuals entering the building as well as to check their identification documents.

Since the third hearing in the trial, held on Feb. 12, all sessions in the trial have been recorded by cameras set up in the courtroom, a first in Turkish judicial history. The setup began when attorneys requested audiovisual recording, citing attempts by security officers to obscure evidence during the second hearing of the trial.

Hayal allegedly said in his testimony during the trial that he had no plan to murder Nobel laureate Orhan Pamuk, a frequent target of neo-nationalist criticism. "I had previously warned Pamuk to act wisely, but I uttered those words out of anger. I devised no plot to kill him. Yet, I hate both Pamuk and Dink," he noted.

A group of protestors calling themselves "Friends of Hrant" gathered at Beşiktaş Square ahead of the trial. The group, holding posters of Dink and chanting slogans demanding justice for the slain journalist, also issued a statement to the press. "The Dink case has become an examination of justice and law for the country," cartoonist Gökhan Gürses said, reading the statement on behalf of the group.

"We have lost Dink for eternity. Everything known about Dink's assassination proves that it was an organized murder. We will always be here for a liberal, egalitarian Turkey where differences are considered wealth," he noted.

The group reiterated the demand of the Dink family and the attorneys representing the plaintiffs, who have been saying that the murder has not been properly investigated. The lawyers of the plaintiffs say some of the evidence has been hidden or destroyed.

The group shouted: "We are all Hrant, we are all Armenian" and "We are all witnesses, we all want justice."

Meanwhile, Freedom and Democracy Party (ÖDP) leader Ufuk Uras, upon a question directed by a journalist on the Dink case, said Turkey needs a courageous judiciary which can dispel the mystery behind such murders. "This can be realized only if we maintain our determination on the issue. We need to get rid of such filth [in our judicial system] so that democracy in Turkey can take root," he said. Judges had not yet announced their verdict as Today's Zaman went to print.