On national park right across from the White House, thousands of people have shown up to watch, learn, and take part in the World Children's Festival, the largest children's festival aimed at celebrating the creative talents and imagination of children fr 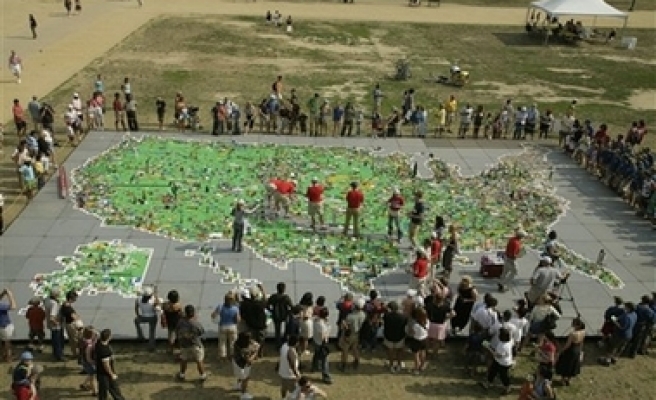 On national park right across from the White House, thousands of people have shown up to watch, learn, and take part in the World Children's Festival, the largest children's festival aimed at celebrating the creative talents and imagination of children from all over the world.

Bringing many different languages, faces, and cultures together to speak through the universal language of art, the World Children's Festival showcases the winners of the third Arts Olympiad, an international arts competition for school children aged eight to 12.

The theme for this year's Arts Olympiad, "My Favorite Sport" celebrates the "artist-athlete ideal for children" drawing over three million participants from over 100 countries who submitted colorful paintings and digital art works on their favorite sports, ranging from soccer, scuba diving, to basketball.

The top artists selected by their country have their work on display under one of the festival's tents, culminating in a colorful, creative, menagerie of imagination open to the public.

About 100 pint-size winners from over 50 countries have come to attend the festival, including the Hashemite Kingdom of Jordan, the Sultanate of Oman, and the United Arab Emirates.

The three day festival focuses on opening up the creative mind and energies of kids through the broad umbrella of art, and features more than 25 performances every day from over 200 hundred kids, from music to dancing, ceremonies to art projects.

The countries from the Middle East like Oman offered silver and gold crafts and design activities for kids, teens, and adults, and there is an Iraqi Children's Art Exchange featured among the more than 75 workshops ranging from art therapy to silk painting.

Children and their families helped construct a huge mural replica of the US using an estimated 1.2 million LEGO bricks. The giant mural features famous American landmarks like the Statue of Liberty and the San Francisco Golden Gate Bridge, and was sponsored free-of-charge by the LEGO Company.

Many workshops are on the theme "art and peace" and there was a workshop on building friendships through ethnic and artistic exchange and music.

The Arts Olympiad program was launched by The International Child Art Foundation (ICAF), a non-profit organization, ten years ago. The aim was to integrate arts with science, sports, and technology to boost children's creativity. Ultimately, there is hope this would help bring in positive social change.