Fifty-nine Palestinians hospitalized in İstanbul on Wednesday after being wounded in recent Israeli attacks in the Gaza Strip have said they are grateful to the Turkish nation for its help. 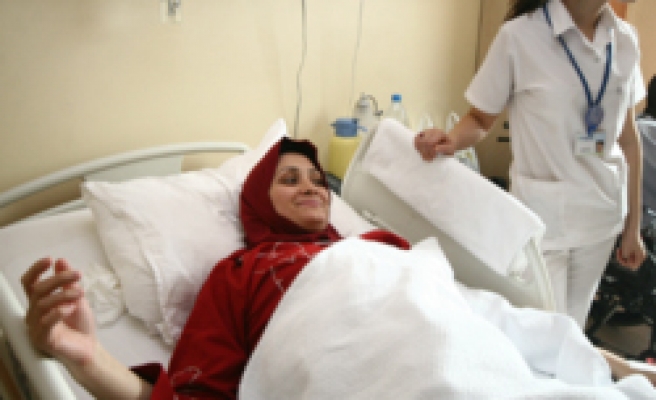 Fifty-nine Palestinians who were flown to Turkey and hospitalized in İstanbul on Wednesday after being wounded in recent Israeli attacks in the Gaza Strip have said they are grateful to the Turkish nation for its help.

Mehe Abul Hatal, a seven-month-pregnant Palestinian who spoke yesterday on behalf of all the wounded Palestinians under medical attention in different hospitals in İstanbul, said they will recover thanks to the support of the Turkish public. "We extend our thanks and gratitude to everyone who has extended a helping hand to us," she stated.

The wounded Palestinians were brought to İstanbul on Tuesday by a chartered Turkish plane after spending weeks in Egyptian hospitals; they were placed in 12 different private hospitals on Wednesday.

"I was shot in the leg by Israeli soldiers and my leg was amputated in Egypt in an operation. Israelis shoot everyone regardless of their gender or age. They usually shoot Palestinians in the leg so that we won't be able to walk. I want my amputated leg back. Can they give it back to me? No. I hope that other people will not suffer with such heavy sorrow. All of humanity should take action to stop Israel," said 25-year-old Hatal.

Bülent Yıldırım, chairman of the Humanitarian Aid Foundation (İHH), the charity organization which brought the wounded Palestinians to Turkey for treatment, said: "The wounded Palestinians will receive the necessary treatment. We will do whatever is necessary. We will not send them back to their countries before they recover." Yıldırım also noted that eight of the injured are in serious condition.

Ruling Justice and Development Party (AK Party) Samsun deputy Cemal Yılmaz extended his thanks to the İHH for helping the Palestinians. "I hope the Palestinians will not have to witness such attacks again. Our wounded Palestinian brothers will be treated in Turkey."