Yahoo Inc. is shutting down Yahoo Photos, an online photo storage site, and asking users to move instead to its Web 2.0 photo sharing site, Flickr, a Yahoo official said. 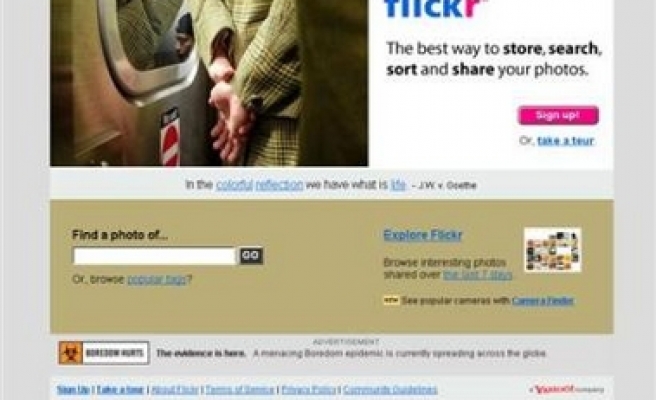 Yahoo Inc. is shutting down Yahoo Photos, an online photo storage site, and asking users to move instead to its Web 2.0 photo sharing site, Flickr, a Yahoo official said.

In June, tens of millions of registered users of Yahoo Photos will be notified of various options including upgrading to Yahoo's Flickr service or various outside-photo storage sites, according to Flickr co-founder Stewart Butterfield.

Yahoo also will offer consumers the option of loading their photos on competing sites when users are notified next month.

Outside sites include PhotoBucket -- the most popular online photo sharing service among users of social network sites like News Corp.'s MySpace -- or more conventional photo printing and storage site such as Kodak Gallery, Shutterfly Inc. or Snapfish, he said.

"Flickr will get top-billing, of course," Butterfield said in an interview late on Thursday about the plan to give users multiple alternatives.

Butterfield and co-founder Caterina Fake, his wife, sold Flickr to Yahoo in 2005. Butterfield is now a director of product management at Yahoo.

"Part of this progress is today's decision to close Yahoo! Photos to better serve our valued customers through Flickr."

Yahoo's move follows the explosive surge in growth by PhotoBucket, an independent photo storage site based in Palo Alto, California, from a quarter of the market a year ago to around 40 percent last month, according to Hitwise Inc. data.

In the same period, Yahoo Photos' share has been cut two- to three times over to around 5.8 percent of the U.S. market. Flickr, meanwhile, has grown to 4.5 percent, up from 3.7 percent, according to Hitwise U.S. Web audience data.

Yahoo continued to support both Photos and Flickr over the past two years, reflecting the different audiences of the two sites.

Yahoo Photos is a more conventional photo-finishing site, full of family snapshots, while Flickr has attracted a passionate fan base of amateur and professional photographers who use the site to share digital photos online, and for whom printing is largely an afterthought.

According to data from comScore supplied by Yahoo a year ago, Yahoo Photos counted 30 million registered users, who had uploaded 2 billion photos as of June 2006.