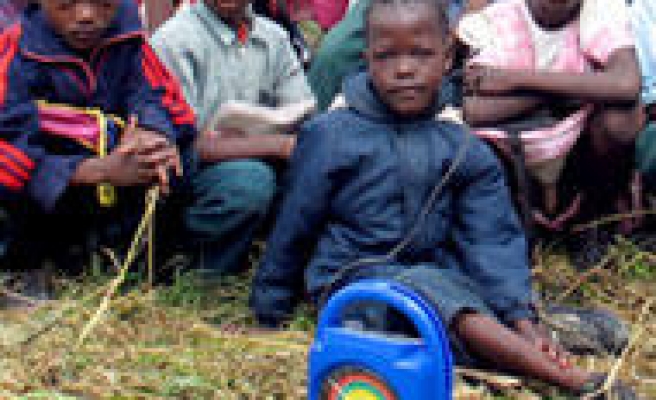 Thousands of children, who cannot afford to attend the southern African country's public or private schools, have turned to informal classes where the radio is the main learning tool available.

Such classes are critical in Zambia partly because of the devastation caused by Aids, which kills teachers faster than replacements can be trained.

One in five Zambians is infected with HIV or living with Aids, and the disease has orphaned more than 800,000 children, many of whom have been left out of mainstream education and are being taught in community schools.

The scheme to provide radios for use in these informal classes was launched five years ago by Britain-based charity Freeplay Foundation, the state Zambia Educational Broadcasting Service and other local and international partners.

Isaac Mwale, 17, a model radio-school student who recently passed national examinations, said: "I would like to become a medical doctor once I have completed my education."

More than 4000 Freeplay radios are used to broadcast primary school subjects in about 850 community schools, and demand is growing.

Freeplay Foundation Executive Director Kristine Pearson says at least 100,000 Zambian children have benefitted so far, easing pressure on schools where the teacher-to-pupil ratio is one to 60, and also catering for some of Zambia's poorest children.

Many families cannot afford the average $157 needed each term to send a child to school in a country where about 65% of 10 million people live on less than $1 a day.

The programmes the children listen to are called Learning at Taonga Market, or Thank You Market.

Mwale, who dropped out of school because his father could not afford to pay, is one of the grateful ones.

Usually 17-year-olds in Zambia are preparing to go to university or other third-level institutions. Although Mwale is only getting ready to go to high school now, he is not upset.

"Taonga has brought hope to many of us, and I want to use it as a springboard to achieve greater heights in life," he said, adding he could compete with children taught in regular schools.

Freeplay says nearly a third of Taonga pupils are orphans and almost 50% are girls.

Most have missed years of schooling after dropping out or may never have taken classes before because of poverty or isolation.

In many African countries, small radios are at the centre of community life and the main source of information for people who often do not have televisions in countries with some of the world's highest illiteracy rates.

In Zambia, radios are also used to deliver information on combating Aids or on how to improve farm production.

Mwenya Mvula, a volunteer teacher since 2001, said, "The (Taonga) programme has proved to be popular. The children appreciate the lessons and so do their parents."

Of the first batch of pupils to sit primary school leavers' examinations under the Taonga system, five out of seven passed and qualified for high school, boosting the credibility of the informal system.

"Taonga has proved so successful that some centres also offer adult ... groups the opportunity to use the Freeplay Lifeline radios after school hours for community health projects," Pearson said.

Givers Nyoni, deputy head teacher at Ngwelele, said: "The children we have integrated into our system have performed very well, in most instances better than those we started with because they are mature."