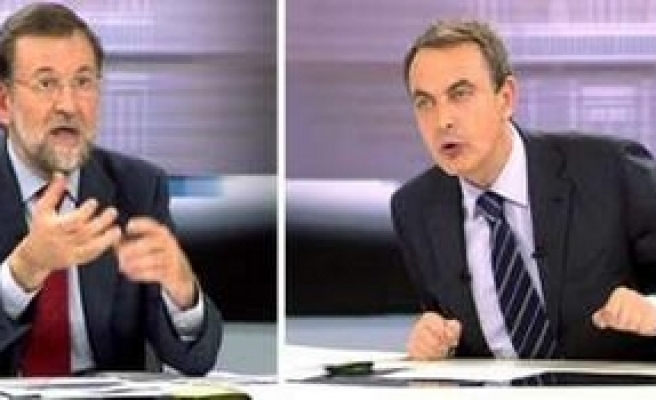 Zapatero, whose governing Socialists have a lead of about four percentage points over Rajoy's Popular Party ahead of the March 9 ballot, has campaigned heavily on his economic record, a point Rajoy questioned following bad news on the economy.

A poll for TV station Cuatro gave Zapatero victory in what was the second of two debates with 50.8 percent to Rajoy's 29 percent, while La Sexta had Zapatero winning by 49.2 percent to 29.8 percent, with 21 percent calling it a draw.

Both results for the debate, in which Zapatero and Rajoy both called each other liars, were better for Zapatero than his narrower win a week earlier.

Rajoy hit back on the economy, the most important campaign issue since economic activity slowed abruptly, unemployment rose, and inflation hit a record 4.4 percent in February.

"A majority of Spaniards are not having a good time," Rajoy said. "When we talk about prices, we are talking about people; the situation of families today is worse than four years ago."

After sniping in the first debate a week ago, many commentators had expected the second encounter to concentrate more on concrete policy plans, but there was little new on show.

Zapatero has blamed external factors for the slowdown in Spain and has said the country's budget surplus will act as a cushion. But some economists see growth slowing to 2 percent this year in Spain, from 3.5 percent in 2007.

Rajoy also accused Zapatero of concentrating on failed policies like his attempt to solve the problem of Basque separatists ETA, who have killed over 800 people over decades of violent action.

Zapatero promised to support the government on ETA, whatever the result of the election and without conditions and challenged Rajoy to say the same.