Pakistani media reported Zardari's visit to Turkey might be related to Musharraf's fate after quitting presidency. 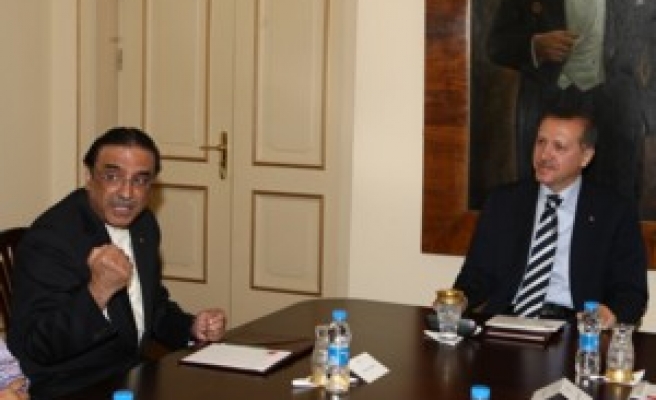 By Worldbulletin with wires

After the meeting, Zardari told reporters Erdogan and he discussed bilateral relations and deep-rooted ties between Turkey and Pakistan.

Turkey and Pakistan would take important steps in several areas especially in the agriculture sector, he stated.

Zardari said he stopped by Turkey prior to his visit to Greece where he would attend a meeting of the Socialist International, and said he would also give information about Turkish democracy in that meeting.

However, Pakistani media reported Zardari's visit to Turkey might be related to Musharraf's fate after possible quitting.

The reports said Zardari's meetings with Turkish leaders raised many questions in political circles of Pakistan.

Pakistani newspaper the News said "the meetings come in the backdrop of widespread speculation that if President Musharraf quits office, he may decide to live in Turkey where he spent his childhood."

The newspaper said "Zardari's visit to Turkey is wrapped in deep mystery as he has gone all alone, without even Foreign Minister Shah Mehmud Qureshi. He has apparently kept his party leaders and ministers away from his visit, which will take him to some other European countries as well."

But PPP spokesman Farhatullah Babar denied that these meetings had anything to do with the possible exile of President Musharraf to Turkey.

However, some sources told the News, the Turkish government wanted to have a private discussion with the Pakistani leader in which Musharraf's future would be raised.

"There is some reluctance in Istanbul to let Musharraf stay there," a diplomatic source told the News, suggesting "one possible issue was how many private guards the Pakistani president should be allowed, if he was given permission to stay in Turkey."

Asif Zardari had last time visited Turkey with Benazir Bhutto, the then prime minister of Pakistan, with an official delegation.

Sources said Zardari would be given extraordinary protocol and importance as the president and prime minister would meet him separately, the report added.