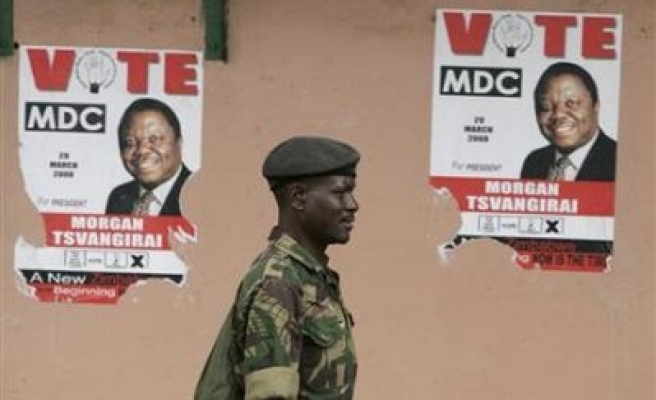 As state media predicted a run-off between Mugabe and his arch rival Morgan Tsvangirai, the Movement for Democratic Change (MDC) opposition said its own calculations showed party leader Tsvangirai had passed the 50 percent threshold for outright victory.

But the MDC's pre-emptive announcement, which came before any declaration by the official electoral commission on the presidential contest, was swiftly condemned by the Mugabe government.

Diplomatic sources meanwhile said there were intensive behind-the-scenes efforts to persuade Mugabe, who has overseen the state's decline from regional model to economic basketcase, to depart the scene peacefully.

Frustrated at the slow work of the electoral commission since Saturday's joint polls, MDC secretary-general Tendai Biti told a press conference Tsvangirai had won 50.2 percent of votes against 43.8 percent for Mugabe.

"Put simply he has won this election ... Morgan Richard Tsvangirai is the next president of the Republic of Zimbabwe, without a run-off."

Biti said the government was trying to massage the results and pointed to a front-page story in Wednesday's Herald newspaper that said there was now likely to be a run-off as neither man had a clear majority.

"The state media has already begun to prepare the people for a run-off ... If that is the position, this party will contest the run-off."

Biti also said that, based on its own calculations, the MDC had won a total of 110 seats, including 11 lawmakers who are part of a splinter faction.

Shortly afterwards, the latest results from the electoral commission showed Mugabe's ZANU-PF party had lost its majority in the 210-seat parliament.

The final results of the parliamentary contest were due to have been declared on Wednesday evening, but the commission announced late at night that there would be no more results until the morning.

Meanwhile the reaction of Mugabe's ministers' to the MDC announcement was notable for its restraint.

"Let's let the electoral commission complete its job then we can start talking from there," Information Minister Ndlovu Sikhoanyiso said.

With 84-year-old Mugabe's grip on power starting to loosen, diplomatic sources said there was a concerted effort to persuade him to stand down with dignity after a 28-year rule that began at independence.

Several diplomats said South African President Thabo Mbeki and Tanzanian leader Jakaya Kikwete were at the forefront of the contacts with Mugabe, who has yet to make any public appearance since polling day.

A senior African diplomat based in neighbouring Zambia said it was vital the 14-nation Southern African Development Community (SADC) mobilised to "prevent a Kenya-style experience," a reference to the bloody aftermath of disputed elections in December.

"This solidarity which has always been exhibited by SADC leaders to their fellow heads of state has to end. This is a crisis," he said.

The economy of Zimbabwe has been in meltdown since the start of the decade, with inflation now standing at more than 100,000 percent and unemployment at beyond 80 percent. Even basic foodstuffs such as bread are now in scarce supply.

In South Africa, Nobel prize winner and anti-apartheid icon Desmond Tutu said he hoped Mugabe would "step down with dignity."